There's a female Muslim superhero! Sooraya Qadir, code name: Dust, is possibly the first practicing Muslimah in the Marvel Comics Universe and also a rare find to see a Muslim having a positive roll in the superhero world.

This is what Wiki has to say about her:

Dust is an adolescent Sunni Muslim girl who possesses the mutant power to turn herself into a sand-like substance. Born in Afghanistan, Sooraya is kidnapped by a slave-trading ring after she is separated from her mother. While one of her slavers tries to remove her niqāb, she instinctively lashes out with her powers and flays them all alive with her dust form before passing out. She is subsequently discovered and rescued by Wolverine and Fantomex. Wolverine takes her to the X-Corps base in India. Sooraya hides herself from the X-Men stationed there by turning into sand and spreading herself around the complex. Phoenix senses Sooraya’s presence and telepathically convinces her to reveal herself to everyone present. Sooraya reforms and announces her presence by speaking a single word: Turaab (Arabic for dust). 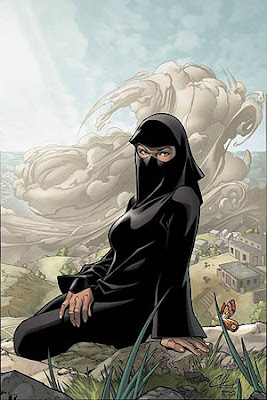 Although I wouln't go to the extreme of wearing niqab, the full face cover that many Muslim women are choosing to wear these days, I do wear a scarf and dress modestly. It doesn't stop me from living my life and doing the things I want to do. It's a common idea of most people to think that just because a woman is wearing hijab she is somehow weak, uneducated and powerless. It's clothing! Fabric! People need to get beyond the garb and look at the person beneath.

It's nice to see that the world is finally beginning to accept women who choose to wear hijab.