The euphoria stage is pretty much over in Libya. There are still lots of flags to be seen all over, and people are still proudly displaying red, black and green, the colors of independence. In the weeks following the liberation there was a rush to hold bazaars where they charged an entrance fee and sold crafts, plants, home baked goods, clothing, and offered games for the children while in the background, music inspired by the revolution was blasting. In those early days there were charity events of all kinds, anything to raise the spirit and make money for those in need. Actually, I heard that the number of new charity organizations soared to over 700 but I'm not sure what the official figures were and if there are still that many.

There were huge drives to collect old clothes. I don't know what they intended to do with them, because I know very few Libyans wear used clothing. One woman told me that many charities sent much of the donated clothing to recyclers and then later sold the bales of shredded fabric to various manufacturers. Throughout Tripoli, people stood on street corners with collection boxes and most gas stations and many supermarkets had boxes where people could toss in their spare change.

The bazaar phase has died down now, possibly because so many people wondered where all the collected funds were going and the lack of any monitoring surely meant that much of the money may have landed in peoples' pockets. But the bazaars served another purpose - citizens got the chance to publicly show support for their newly liberated country, and for those who had been supporters of the former regime found that organizing and attending bazaars gave them a very public venue to show that they'd switched sides - a way to try to wipe their slates clean.

Nowadays Libya is going through the lecture series stage. NGO's have popped up everywhere offering lectures and workshops for all sorts of things; civic awareness and women's issues seem to be near the top of the lists. There are many seminars for doctors and the medical community too. You don't even have to leave home as Libyan satellite television channels are awash with talk shows with the lecture series flare.

In spite of all the good works that are going on, the crime rate is rising. We've heard of many houses and farms being burgled, and it's hit very close to home recently with my brother-in-law's farm right next to ours being burgled. We were awoken about 4am when our dogs started barking. My husband opened the window and called out to quiet them and we went back to sleep. In the morning my brother-in-law discovered all of his sheep were missing. My husband had inadvertently helped the thieves by quieting our dogs! But in hindsight, it wouldn't have been safe to go outside as the burglars were most likely armed - and dangerous.

Another incident happened a few nights ago, at about 3:30am, my daughter Sara heard the sound of our gate being opened. She ran in to our bedroom to wake us and my husband ran out of the house so quickly to investigate that he took his pillow with him. Our gate was wide open but he found no one there and nothing was missing. But the event has left us feeling very vulnerable. But we laugh when we recall my husband and his trusty pillow - maybe he could use it to smother the thieves!

This past week we've also noticed an increase in check-points because of the problems in Beni Walid. One evening I had to pass through twelve checkpoints on my way home from work (normally there is only one or two). We've also heard reports that in the past week there have been gun battles in areas around Tripoli, and even a firefight taking place inside the emergency room of Central Hospital. Gunfire can still be heard periodically throughout the day.

Even worse than the rise in theft and the sound of guns is the news of girls and children being abducted. Last week one of my daughter's friends disappeared. She was on her way home from university and had boarded a bus with her neighbor. She called her mother to say she was on the bus and would be home soon - they'd planned to go out together as soon as she got home. But the girls never made it home. Their mobile phones were switched off and they've disappeared without a trace. If I didn't know the family personally I'd have dismissed the story as a rumor - but it's true. I cannot even begin to imagine what the family is going through. The girls check in with the missing girl's sister at regular intervals to see if there is any news. Lots of tears are being shed in our house as we wait and pray for her to return home safely. It's just so upsetting.

If something like this happened in a western country there would be alerts all over the media, but here it's kept quiet in the hopes of protecting the girl and her family's honor. One wonders who is behind such crimes. Is this the work of Kaddafi supporters? Or some criminal or psychopath that's escaped (or been let loose) from the prison? Or just a random crime? Only God knows. We hope and pray for the girl's safe return.

We know that it will take time for Libya to get back on its feet again. Soon it will be the anniversary of the uprising. Has it really been a year? So much has happened, so many changes. I'm trying so hard to be optimistic, but sometimes it's hard, so very hard. 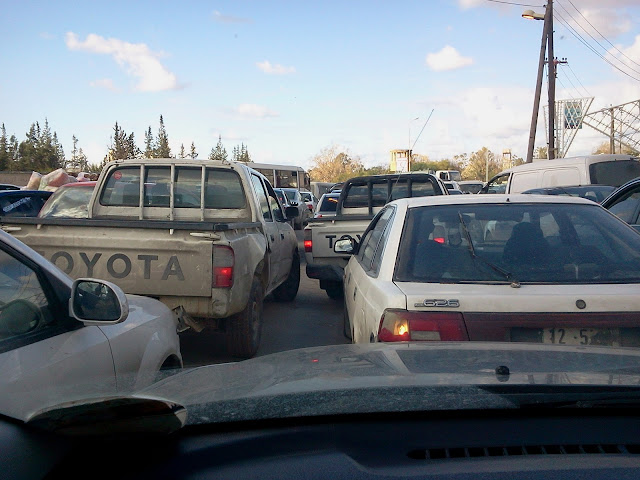 Hopefully we'll have all the kids enrolled in school by next week. And hopefully all the puddles will be dry too.
- January 13, 2012 2 comments:

I've got my first cold of the new year. Cough, cough, cough. I'm self medicating; nighttime cough syrup, hot tea and ibsisa with honey. Ibsisa is a Libyan concoction of ground roasted barley and spices mixed with a bit of oil and toasted nuts and honey. God alone knows how many calories are in there, but it's supposed to be good for you. So far my cough hasn't got any better, but it's not got worse either. 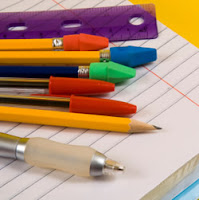 This week was back to school week in Libya (Finally!). So far there are no books and no curriculum but the kids are out of the house and mothers all over Libya are finally getting a break, myself included.

I visited a school this week to see how things were going. The principal showed me around. Some of the kids were out in the schoolyard kicking a ball around while their teacher disinterestedly looked on from a bench on the sidelines. Inside the school the noise was deafening. We looked in on one classroom that had kids running around, jumping on the desks with their teacher right in the middle jumping with them. Candy wrappers and empty juice boxes littered the floor. Out came the stick... the principal shouted as she waved her stick about, banging on the desks. 'Who has a mobile phone! Anyone that has one better put it on the desk right now! If I search you and find one I will throw it on the floor and smash it!' No one admitted to having a phone.

In the next class tiny little first graders sat timidly in rows in their desks while the teacher stood next to a completely clean whiteboard. The principal asked the teacher why her pupils were just sitting there. 'Make them take their notebooks out. You don't need a schoolbook to teach them the alphabet! Where are their pencils?' The teacher looked as though she had no idea what she was supposed to be doing. Across the hall a teacher was leading some kind of chant. The kids were all jumping up and down, all trying to out chant each other. The teacher was jumping up and down too. I'm not quite sure what they were chanting because it was too loud to hear any of the words. It was an interesting visit. It was only one school but I bet that the rest of the schools are pretty much the same.

Later, when my kids came home I asked 'What did you do at school today?' No surprise when they replied 'Nothing'. At least they are out of the house, and I have a few hours of peace everyday. And for this week I'm happy to take some nighttime cough syrup and crawl back under my blanket.