The annual pre-Ramadan shopping trip with my mother-in-law went off without a hitch.  She was waiting downstairs for me to arrive, making sure to get into the car before any of my sisters-in-law saw us. Off we went. She had about 40 dinars rolled up and stuffed in the top of her sock. Of course I didn't let her spend any of it. We had a great time looking at everything and deciding what to buy.
My mother-in-law made the comment that the quality of things was so much better than it was in the past. What she didn't know that I was making sure to take her to shops that sold better quality things. There is a lot of junk out there, and it's such a waste to spend money on it. I really think the shop owners should feel ashamed to sell some of the stuff. But I guess if there are people who will buy it, then they will sell it.
We filled the car and I drove her home and we got some of the nieces and nephews to help us carry it all upstairs. They laid it all out on the floor in the sitting room and my mother-in-law was running back and forth like a proud hen, putting it all away - but not too quickly. She did make sure that everyone had a good look. Then she insisted I have lunch with her and spend the afternoon chatting.
I'm blessed to have such a dear woman for a mother-in-law. She's all set for Ramadan. It was a wonderful day.
- July 31, 2010 3 comments:

Working hard - I deserve a day of rest

I have been working really hard the past few weeks. I'm trying to get everything done and sorted out before the Ramadan break. By 'really hard' - I mean that I've been leaving the house at 7:30 in the morning and not getting back home until around 10 o'clock at night. Hubby is complaining and my reply is to ask him if he has finished the things that are on his list to do before Ramadan. Guess what? Hardly anything is crossed off his list.... grrrrr! Mr Balah Wassah is going to get a kick in the butt soon.
Yusef told me last night that his grandmother (the Libyan one) has requested a new alarm clock. Every year, at this time of the year, I take her out shopping to stock up on things for Ramadan. The alarm clock request is her polite way of hinting that it's time to do our annual shopping trip. I told Yusef to inform her to be ready on Saturday morning - and NOT to tell her when any of my sisters-in-law were hanging about. I don't want this to turn into a circus - which is what will happen if I'm dragging any of the sisters-in-law along.
I'm just going to hang around today. It's been a long and arduous week - time to just sit back and relax for a day.
- July 30, 2010 No comments:

I was chatting with #1 son the other day. I asked him what he'd been up to lately. 'Not much. Just a bit of fishing and hanging out.' he replied. 'Do you wanna come home for a visit?' I asked.  'No way. There's nothing to do there.' he said. Through the miracle of the internet, he sent me some videos of his latest fishing trip and also this picture: 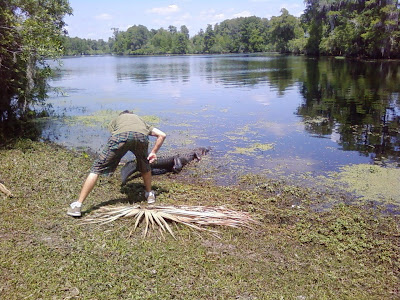 He's right... there's nothing to do here....None of his friends here have a boat to spend the day on and there are no gators to mess with either. Time for me to go for a visit, check up on my #1 son and spend time with my family.

What a week! Last Sunday I logged onto Facebook and noticed that one of my sisters (the brown-haired one) had posted a comment that my mom was in the emergency room. Of course, no other details were given so I frantically tried contacting someone, anyone, that could give me more information. I finally got hold of another sister (baby sister) who had no idea what I was talking about and had to check Facebook to see for herself. No one answered the phone at my mom's house and my son (#1) wasn't answering his phone either (he was at the ER). By this time I was not only worried, but totally pissed off too. What was going on???
Finally, I found out that my mom had been feeling dizzy and had had pain in her arm, so they decided to take her by ambulance (911!) to the hospital where she was admitted for tests. After a few days and tons of tests (it took days for the cardiologist to do his thing) they said she was fine and could go home. I still haven't gotten the whole story - my sister's cryptic Facebook posts about mom stopped, and it seems that none of my sisters are communicating very well (ahhhh... sibblings!). My son just says 'Mom, stop worrying. Grandma's fine.' And of course my mother isn't saying much either. Maybe she thinks I will worry too much - but not telling me what's going on just makes me worry all the more.
After three days my mother was discharged from the hospital. She got home and was settling in, walked out into the back porch and slipped. Crash! She twisted her ankle, there was lots of pain, the ankle swelled up, and she was off for another trip to the emergency room. Twice in one week!! After looking at the x-rays the doctor pronounced 'It's just a sprain. You should keep off your feet for a week'.
Mom is home - resting and playing solitaire (I hope). I think it's time for me to go 'home' for a visit.... to see my mother... and to beat up my sisters and  #1 son.
- July 16, 2010 3 comments:

At long last... the World Cup is finally over. Now things might be able to get accomplished .. hurry up... Ramadan is only a few weeks away. And then there will be another whole month of the population in a stupor again.

Tripoli, the past and the present

I've finally found some time to sit down and relax, check my email and do a bit of reading. I was looking up some information about Ibn Battuta and came across two posts about Libya on the Saudi Aramco World website.
- July 08, 2010 2 comments:

I was driving home this evening at eight o'clock. The roads were full of crazy drivers - all trying to get home to watch the World Cup. I was nearly driven off the road by one idiot and I had a guy tail gating me and flashing his brights - well he was trying to flash his lights at me... he was too close to my rear bumper for the lights to reach my rear view mirror. I just made it a point to drive even slower (but I was still over the speed limit).

The last match is on Sunday. I will be so happy when it's over and life can get back to 'normal' again. I'm so sick and tired of hearing about football.
- July 07, 2010 No comments:

More on Beach Safety for a Safe Summer

A little over two years ago I wrote a post about the beach season in Libya and posted a link to a wiki about how to survive a riptide. This innocuous post brought forth a barrage of comments - many quite negative and quite a few that were so horrible that I couldn't even post them! Beach safety became the HOT issue of the day in the blogosphere!

Well, it's beach season again in Libya. And safety is still an issue. I found an interesting post titled: Recognize the Real Signs of Drowning and Save a Life. Have a look at the links in this post - you just may save a life, it may even be your own!

I got up this morning at six, which is when I normally wake up, but of course this is my day off and I don't need to be up so early. I made the most of it and had a peaceful breakfast on the front porch (after putting the dogs out on the farm).
My internet has been intermittent lately. At one point I had no internet at all and had to contact the company, which took days because they don't answer the phone. Finally, I got through to someone at LTT and they decided the problem was with my wimax modem. 'Bring it into the service centre to be looked at.' said the service rep. 'The office closes at four.' I looked at my watch, it was 3:25. 'Hurry up Nora! I think we can make it!' I shouted.
My children have inherited the genes of two very different people from two very different places and cultures. Unfortunately, my daughter Nora has inherited the Libyan time gene from her father. The concept of 'hurry up' doesn't exist for her. We arrived at the service centre at 4:05. It was closed of course. So internet was put off for another day.
I finally made it to the service centre and my modem has been sorted out. I'm catching up on emails and finding out what's up in the blogosphere. And what do you think is going on?
Pleasant surprise for me! My blog is being featured on Pocket Cultures. You can see it here: Libyan Summer