There's an interesting article on Oprah.com by writer, Krista Bremer, an American woman whose husband is from Libya. She writes about her daughter's choice to wear hijab.
You can find the article here: Cover Girl 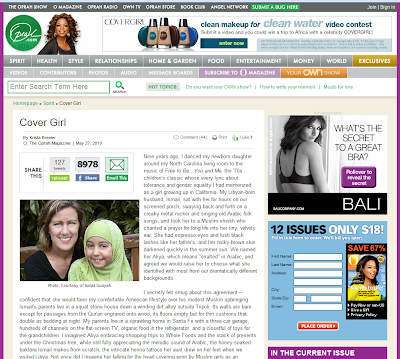 Krista is the winner of a 2008 Pushcart Prize and a 2009 Rona Jaffe Foundation Writers' Award. She is associate publisher of the literary magazine The Sun, and she is writing a memoir about her bicultural marriage.
- May 29, 2010 3 comments:

A few weeks ago I blogged about how the electric company were out changing all the cables and putting in new poles in my neighbourhood. The guy from the electric company had told me it was to make sure that everyone had a steady supply of electricity in the area. Apparently some of the neighbours had been having problems with very weak power, leaving them unable to run appliances and dimming their lighting. Our electricity had always been fine...until now....
Ever since they 'fixed' the electricity we've had weak power. The microwave takes twice as long to heat up anything, the lights are dim and go on and off. Sometimes the lamps blow up. Today we tried to use the popcorn maker and finally gave up and made the popcorn the old fashioned way. The wimax modem keeps disconnecting. If it messes up my computer I'm going to be pissed off for sure.
I hope they get their act together.. grrrrr.. this is really making me cranky!
- May 28, 2010 No comments:

Final exams are well underway. Sara and Jenna have finished and are now waiting for their results. Jenna mentioned that her results were supposed to be out by next Thursday... hmm.. I'll believe it when I see it. Tomorrow Yusef begins his exams. He hasn't been doing as much studying as I had hoped, but he seems confident. Nora's finals are coming up.
I hate this time of year - way too much stress for everyone.
- May 22, 2010 No comments:

It's a sunny day! 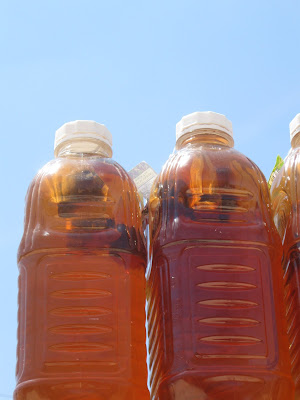 When we started building we soon discovered that wood was very expensive. Even though the main building material used in Libyan houses is cement and blocks there is still a need for wood to make things such as scaffolding, support for windows and archways and many other uses. So we started collecting and stockpiling  scrap wood. We came across some old wooden rolling shutters and they were added to the wood pile. We will use the wood for something... eventually...
Recently, while I was surfing the net, reading one of my favorites since we started building - Design Sponge, I came across this really cool chaise lounge designed by uhuru . 'Ah ha!' I shouted,  'I think we can put some of the wood to use!'
How about if we turn this: 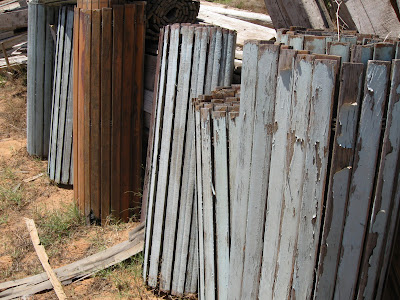 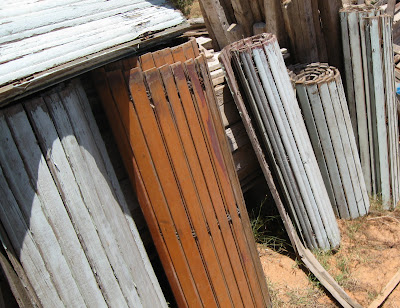 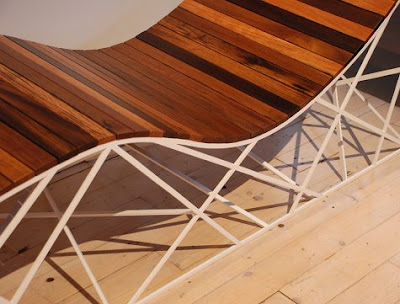 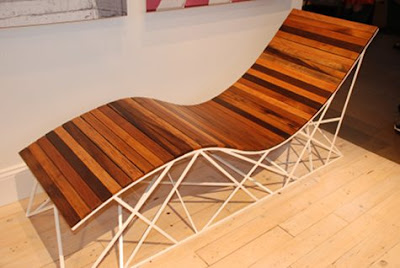 I don't like the way they made the metal part on the bottom, which is supposed to emulate a Coney Island roller coaster - I'll design something simpler and more pleasing to the eye. But I think it can be done. It will be perfect for the garden. What do you think?
- May 17, 2010 3 comments:

One person's junk is another person's garbage

I'm working on the laundry for as long as the electricity holds out. For the past week or two the electric company has  been 'fixing' the electricity in our area, putting in new poles and disconnecting and reconnecting the cables. I'm all for progress, which is great news, but it's getting to be a nuisance having the electricity switched on and off all the time.
The old poles that have been removed by the electric company have been tossed onto the sides of the roads, left abandoned, probably forever. My neighbourhood is looking pretty 'junky' these days. There are homes being built and the builders just pile the leftover rubble on the sides of the roads. Recently, there was a car that caught fire nearby - the burned out wreck has been left to rot. Actually there are quite a few rusting heaps of old cars littering the area. In places you can find piles of trash that people have dumped.
There are plenty of dumpsters in different areas of Tripoli for people who live in areas that don't have garbage pick-up. We just load up the garbage and drop it off on our way into town. They usually have workers that sit next to the dumpsters waiting to help you unload your car. So Why do people dump stuff on the sides of the roads in the countryside?
OK... I'm not going to stress out over this.... I'm going to just pretend it's 'rural art'. Time to get my camera out...
- May 16, 2010 1 comment:

We've had all kinds of weather today. The day started out lovely with breakfast on the front porch. Later in the afternoon the winds changed direction and velocity. The temperature rose to a toasty 108 F. It was like a furnace. We spent the afternoon inside; the kids studied for their exams, hubby worked on paperwork and I sat on the sofa with my laptop, chatting with friends and reading. Ibrahim played with his matchbox car collection.
In the evening I had to go out to the shops to pick up a few things, mainly snacks to help the kids through their studies. I looked at my car parked in the driveway. It was covered in a thick layer of sand. I considered hosing it off, but then just decided to see if most of the dust would blow off as I drove. If the weather outside was hot you can only imagine what the interior of the car felt like. One day I think I will try baking a cake in my car just to see if it would work!
The hot winds blew me into a shop and ten minutes later I stepped out of the shop to find the temperature had dropped about 20 degrees. Shortly afterwards it started to rain.
What weird weather! I wonder what tomorrow will bring. 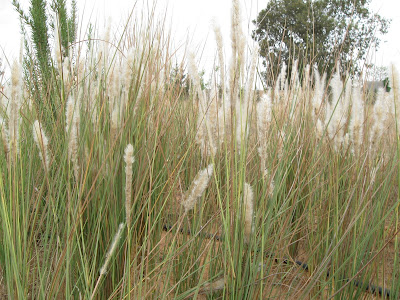 My deepest sympathy to the families and friends of the victims of yesterday's plane crash.
- May 13, 2010 No comments:

Who's got the problem?

Here's an interesting quote:  "This is the problem in Libya - the women." I found it in a small news article: here


I disagree... the problem in Libya are the control freak men these woman are married to ... sigh.... I see so many educated girls that get married and stay home, not because they want to, but because their husbands insist. I cannot understand why girls spend so much time studying and then have to give it all up because their husbands want a stay-at-home wife. Why didn't they just marry an uneducated girl in the first place?  I've met female dentists whose husbands made them quit working after they got married because they didn't want them working on male patients. Why did they marry a dentist if they felt that way? Why do these girls just give in and agree to give up their careers? Are they so afraid of becoming spinsters? Why can't they be married and have a career too?


Some women I've spoken with have told me that they have a degree and that it's some security in case they have to go out to work in the future. But how can they rejoin the workforce after being away? Can a doctor, dentist, pharmacist, etc. take an extended break from their career and then step right back in again?  I doubt it.


Libyan men think they are the center of the universe... and I guess their women must think that too. I've even noticed that many Libyan girls give up blogging when they get married. sigh...
- May 10, 2010 12 comments:

It's Mother's Day in America (and in my house here in Libya). I treated myself to a mother's morning out and spent it getting my hair trimmed. I look fabulous now.

Happy Mother's Day to all you moms out there... and especially to my own mother. I wish I was there to spend the day with you.

Who is kitchen today?

I made a schedule for the girls for kitchen duty. They each have their assigned days. My days of dish washing are over - I brought three daughters into this world so that they could take over this chore for me. Oh how I hate to wash dishes!

This past week they've been fighting among each other and I have been hearing raised voices: 'You left dishes from yesterday!' and 'Those coffee mugs are from last night!' and 'Someone put the tagine pan in the fridge instead of washing it! That scrap of chicken is NOT a leftover!' And then I noticed that someone had removed the duty schedule that was posted on the refrigerator. Everyone was claiming it was not their day. 'Who is kitchen today?' I asked. Of course all three of them replied 'Not me!'

This evening I went to the supermarket and when I got home they all rushed out to help me unload the car. Not because they like unloading the groceries, but because they all wanted first dibs on the junk food. But guess what? I didn't buy any junk food! And while they were all pushing and shoving each other to see what was in the bags, I quietly left the kitchen and locked the door behind me. I'm not letting them out until the kitchen is clean.
- May 07, 2010 3 comments:

We had no electricity all day yesterday. The electric company is moving the poles and putting in new cables in our area. This morning they came and said they needed to move the poles on our farm so they would need to come inside. It took Ibrahim and I quite some time to get the dogs under control and secured inside. Cisco was holding his ground and refusing to budge - I actually had to physically pick him up.... that dog needs to go on a diet! He's heavy!

The electric company guy promised me that they would only have to turn off the electricity for about an hour and  a half. Why don't I believe him?

I'm also stuck using my mobile phone to connect to my laptop to get internet. The wimax allotment has run out... 10 gigabytes doesn't last very long. I'll be back to wimax in another week or so. It's actually come at a good time. The kids have final exams starting next week - internet would just be another thing to distract them.