A Decade of Blogging in Libya

This post marks the anniversary of a decade since I started this blog. It's been an amazing, interesting and certainly educational ten-year journey. My online life didn't begin with this blog, it started out as a project to learn about web design, which came after my quest to learn how to master Photoshop, which I never quite managed to do! One thing led to another. Originally, I set up a website and taught myself simple coding and design using various web design programs. The website I created focused on Libya, the country that I called home. There wasn't much information available about Libya online at the time and I learned about this amazing country as I assembled it all. 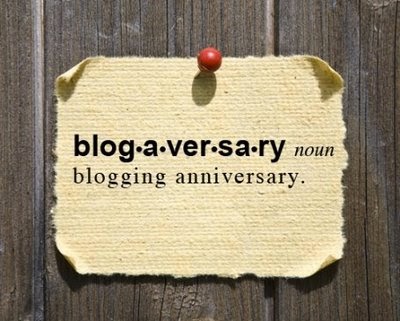 Websites, however, cost money, and as the Internet evolved, blogs came onto the scene - and they were free! Designed for people with few skills in web design and not much knowledge of coding, blogs soon became an easy and popular way for people to express themselves on the Internet. By this time I was ready to move on to other things and so I decided to stop paying the fees for my website and moved on to blogging. The domain name of my former website is still out there. Originally, a German man bought it and tried to sell it back to me for a few thousand dollars, but I wasn't interested. Since then someone else has bought up the address, which these days is a Japanese massage therapy site - nothing naughty, thank God! It does make me wonder what KhadijaTeri means in Japanese.

My blog started out as a way to keep my family and friends 'back home' up to date on what was going on in my life. My kids were growing up, we were busy building our house and Libya was constantly evolving. I wanted to reassure my family that we were safe and well. The blog became a kind of online journal. Soon though, it took on a life of it's own. Libyans who could speak English began to read my blog. People who had lived in Libya in the past - many who were stationed at the American Wheelus Airbase (which is now called Mateiga), World War 2 veterans and ex-pat workers took an interest in my blog to see how things in Libya had changed over time. Homesick Libyans who lived abroad were also interested, and people who were planning to move here for their work or careers, as well as the spouses and girlfriends of Libyans who were living in different parts of the world. I receive emails and messages from people from all walks of life, asking for advice and information, or just wanting to be friends. I've met many wonderful people because of my blog as well as a few weirdos, but mostly I can attest that it has been a positive experience.

Like all good bloggers, I like to keep track of who is reading, and for this I have a few counters that keep track of the statistics. You can see one on the sidebar. At the time of this post the count stood at just under 439,000 people from all corners of the globe that have stopped by for a visit. That's a lot of visitors - nearly half a million clicks!


Over time I started to post less often, but still I've continued to post. During the revolution, when the Internet service in Libya came to an abrupt halt, I kept a daily journal of what was happening in my life and posted it as soon as the Internet returned and things seemed safe enough to do so (you can find those posts in the tabs along the top - one for each month).


Throughout the years of the Gadaffi regime I had to be careful of what I wrote about, but honestly I think they let me get away with quite a lot! For a while during those years, Libyan security had people infiltrating the Libyan blogosphere, posting comments and some were even blogging themselves. Quite a few Libyan bloggers stopped blogging because of this, but undaunted, I kept on.

After the revolution, there was a brief period of freedom of expression. You can still say what you like, but there's a real risk of being kidnapped or assassinated if someone doesn't like what you have to say - and no one seems to know who exactly to be mindful of these days. The whole concept of freedom is new for Libya... it will take a while before they finally get the hang of it.


Blogging became a part of my life in different ways. Over time I've had other kinds of blogs - this blog sprouted others. One blog that I'm particularly proud of, is called Libyan Street Art which I started shortly after the liberation of Tripoli. It is a collection of graffiti and street art, much of which I photographed myself. The graffiti represents an important aspect of Libya's part of the Arab Spring. A substantial amount of the art has been painted over since then, so I am very happy that I was able to collect these wonderful displays and preserve them in one place before they were lost forever. The Libyan Street Art blog has been featured in festivals held in Spain and France and was also part of a study done by a Libyan post grad student in the USA.

My enthusiasm about the world of blogs took me to introducing blogs and blogging to my students as a way to encourage them to write and read more in English and led me to setting up student blogs at the schools where I have worked. A colleague and I were so impressed by the impact that it had on our students' writing that we were inspired to present a workshop about student blogs for English teachers in Libya. I've also collaborated with school and student blogs in different parts of the world. Another aspect of my blog has been having guest posts which has been very popular with readers, and I've also been a guest writer on other people's blogs. It's really been an interesting global adventure!

What will the future bring? That's hard to say, but for now I will keep writing and posting. It's been an awesome 10 years. Thanks for reading!

I'm enjoying the ac
Blasting away at 18°C
It's going to be a great day
As long as the electricity doesn't run away.

(in Libyan Arabic electricity isn't cut, it runs away)

The main road near where I live passes by an area that has a strip of vegetable stands. I rarely stop there because the vegetables are all a bit over priced - the vendors take advantage of their convenient location knowing full well that people will pay a little more to save themselves some time. 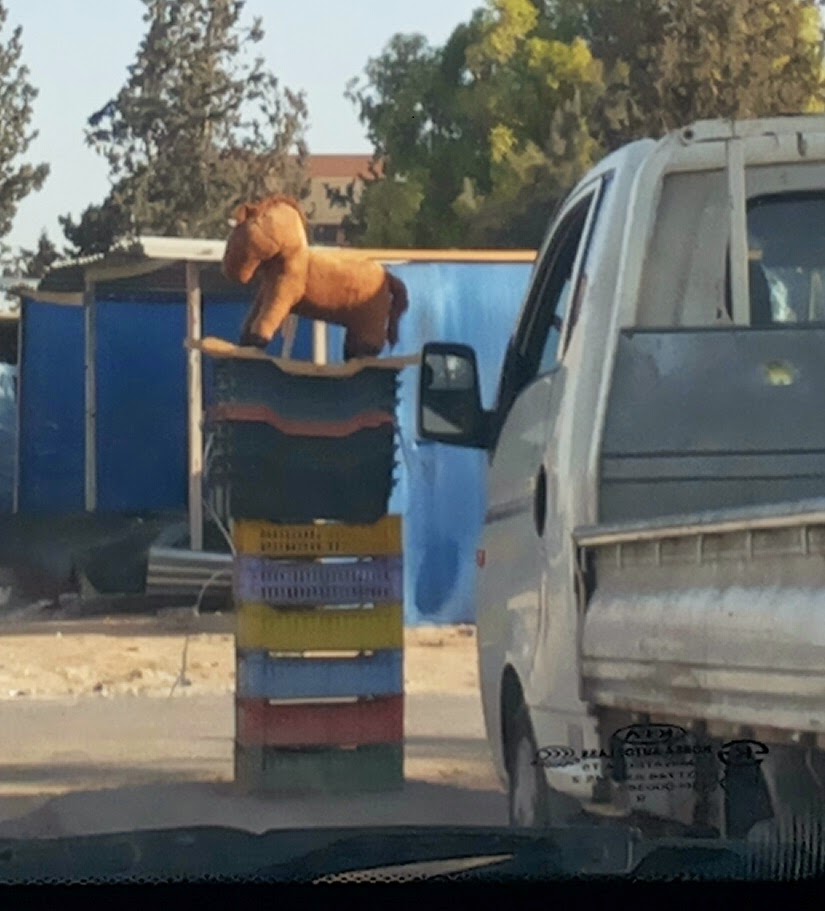 Roughly in the middle of the strip is a small grubby looking trailer with blue water and white fish painted on the outside.  On display next to the trailer is a large brown stuffed rocking horse perched atop a stack of produce crates. Every time I pass by I wonder why it's there. Are they selling horse meat along with the fish? I've never seen horse meat in Libya, but I have seen it in shops in neighbouring Tunisia.

One day while I was out with my daughter I had a bit of time on my hands and decided to investigate. I pulled the car over. My daughter asked me why we were stopping. 'Once and for all I'm going to find out what the horse is all about' I replied.

I walked up to the horse and had a closer look... definitely a stuffed rocking horse. Then I proceeded to the front of the trailer. There was a man standing behind a display of fish. 'Asalamualaikum! My brother, do you sell horse meat?' I asked politely. With a surprised look the man replied 'No my sister. I sell fish. I have many kinds of fish. Why do you ask about horse meat?' I pointed to the rocking horse and said 'I noticed that you have this rocking horse on display. Every day I pass by and wonder if it is because you sell horse meat. I was curious and thought I would ask.' Now it was the man's turn to be curious. He asked 'Do you eat horse meat?  I only have the horse as a decoration, but you may have it if you like.' I smiled and said 'No, no, I don't eat horse meat, but I wondered if you had any what the price would be. I have many dogs on my farm and I thought that if the price of horse meat was cheap I might buy some to feed them.'  The man laughed 'Please take the horse, I am only using it a decoration. Please take it as a present.' I smiled, shaking my head 'Thank you my brother, but I have no small children to play with the horse. You should keep it here as a decoration.' The man spread his open hands out over his displays of fish 'Well then, I have many kinds of fresh fish for sale, my sister.'  'Another time' I replied 'I'm not heading for home and it's too hot today to keep fresh fish in my car'. 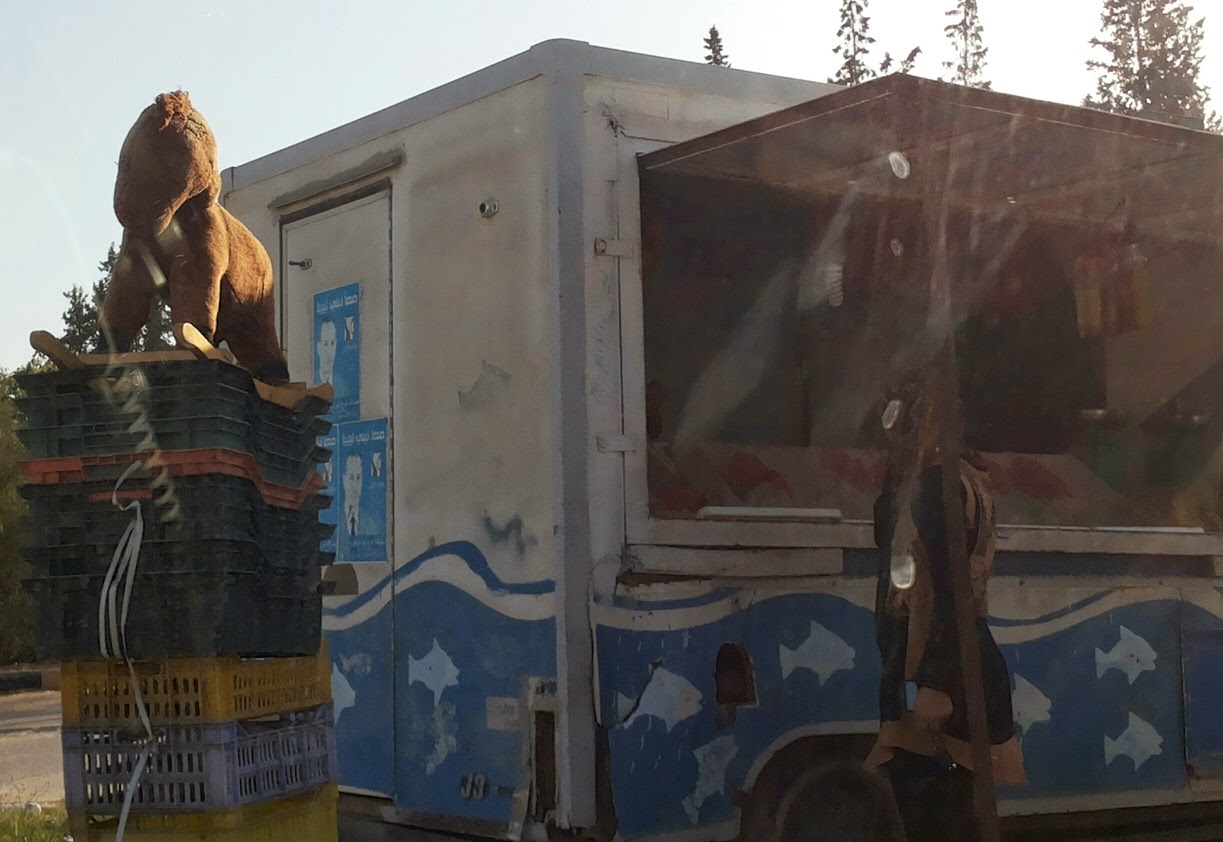 When I got back in the car my daughter asked 'What happened?' I laughed 'He only sells fish. The horse is just for decoration!' As we drove away the man waved at us, and we waved back. My curiosity has been satisfied.