The internet stopped at this point and I began writing daily and saving it to post later. March 2011 continues here: March 2011
- March 03, 2011 No comments:

A normal day in Tripoli

It's some kind of a holiday here in Libya - 2 March; the anniversary of the declaration of Libya as a Jamahiriya in 1977. I'm not going to go into an explanation here, you can find out more if you are interested here. One thing I was sure was that there would most likely be a big long speech. And I was right, of course.
I haven't been out of the house in over a week and I wanted to get out. I needed to refill some medicine, so hubby and I went for a drive. Essential shops were open; pharmacies, grocery stores, butcher's, and bakers which had long lines of people. Most of the vegetable stands were closed - the Egyptians who had previously run them had left. In some areas farmers had parked pick-up trucks along side the roads to sell their produce. The supermarkets were busy, but most of the basic food stuffs are running low. The aisle that had once been full of ladies sanitary needs had only 5 packages on the bottom shelf so I took all five and made a mental note to hunt down more. The gas stations were open and cars were lined up waiting for fuel. The rest of the shops were closed, their green shutters rolled down, some of them with graffiti that had been covered with paint of various colours.
We drove around the city to see what was happening. Women holding shopping bags hurried about with worried looks on their faces. Men wearing green scarves around their necks were busy putting up green flags. Pick-up trucks with oil-company stickers slapped on the sides but without licence plates were parked at roundabouts, doors and windows open to reveal uniformed men with machine guns inside. A huge crowd of people were at the port waiting to board a ship that would evacuate them to safety. Anti-aircraft guns were  placed at various places along the coast road. The weather was beautiful but no one was enjoying the day. The whole atmosphere was weird, it felt as if you were being watched or followed. It felt as though any second something horrible could happen - it felt unsafe.
We arrived home and found the speech in full swing. I put away the groceries and sat down to watch, mostly to see if I recognized anyone in the audience. He droned on and on, repeating the same things he's been saying the past week, from time to time taking a break so the audience could chant slogans (and wake themselves up). After a while I got bored and took a nap.
I'm getting tired of staying at home. The kids want to go back to school again. Today I said to a friend: 'I want things to be normal again.' and she laughed and replied 'Things have never been normal in Libya!'

Today I tried to get away from watching the news. Sometimes you need a break. So I checked into the Chive for a laugh.... boy a laugh is pretty useful now and again!
While I was there I found this example of a delusional dictator: 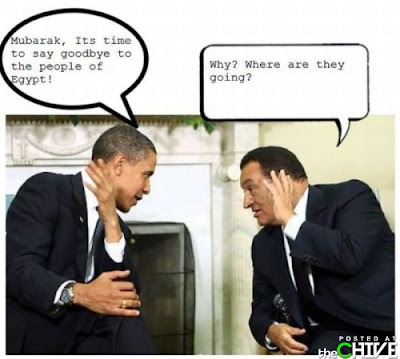 Is it March 1st already?

The days are all pretty much the same lately. The difference in my house this week is that it's Jenna's week to do the dishes and she's incredibly lazy and doesn't do a good job in keeping up with it. So the result is there are piles of dishes on the kitchen counter. I need to cook and I hate starting out with a mess. Since my throat surgery  last year I try to avoid shouting (which never does any good anyway).

Jenna's been on my nerves lately anyway. I'm not sure what bugs me the most - is it her teenage attitude or is it the Justine Bieber hairstyle she's sporting? Maybe a bit of both!