It's funny how sometimes when you think about something that happened in your distant past it doesn't seem so distant. It feels like it's just the other day. Take this picture for instance: 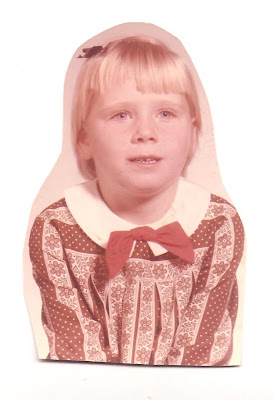 I remember that day like it was yesterday! I was in kindergarten and it was photo day at school. My very first photoday! It was so exciting. All the kids in my class marched single file, down the corridor to a classroom that was set up as a studio for the day.

In American schools when I was growing up there was a picture day every year; a photographer came and took all the kid's photos, one after the next. After what seemed like ages the photos came back and were handed out to each student by their teacher. They were always in a big envelope and had what seemed like hundreds of pictures inside of different sizes, but most of them wallet-sized, and all of the same pose. There really weren't hundreds of pictures... it just seemed that way. It's strange how you remember things.

Looking at this picture the first thing I notice is the dress. To this day I can feel the stiff, smooth cotton. I wonder why my mother picked out this dress because the colour doesn't suit me at all. I was usually dressed in softer shades of pastel blues or pinks. This dress was different; brown and white with a red bow on the white collar. It was long-sleeved but very short in length as was the style in the late sixties. I'm fairly certain I had on patent leather shoes because my mother always bought shiny patent shoes for me to wear.

I had tried cutting my own hair, the chopped bit is quite obvious. Why do all kids have to try cutting their hair at least once during their childhood? And I remember the hair clip that was in my hair. It had a brown grosgrain ribbon bow on it that never stayed in my hair for more than a few seconds. In fact, I remember the teacher and photographer trying to sort my hair out before my picture was taken that day. I distinctly remember that they used the same comb for all the children and I wasn't thrilled with the idea that they would use it on my hair but I didn't protest because I was afraid making an issue out of it would embarrass someone - like accusing them of being unhygienic or something. They combed my hair and put in the hair clip and I tried to push my hair behind my ears. Twice they tried to get me to stop pushing my hair back but I did my best to defeat their efforts.

There was a small, backless metal stool to sit on. 'Sit forward.' the photographer said. I sat too far forward and the teacher came and tried to help the photographer position me just right. 'Look here!' said the photographer. I didn't really know where to look. She wasn't pointing at anything! 'No. No. Here! Look here!' she said again. I'd moved out of position; the poor woman was losing patience with me. 'Lean forward... No. Not like that!' She moved towards me to set me straight and as soon as she stepped back I leaned too far forward again. She finally gave up and took the picture. I was relieved that it was over and hopped off the stool to join my classmates waiting in the corridor outside the classroom that was being used as a photography studio for the day.

Isn't it odd how you remember things from long ago so clearly, while this morning was ages and ages ago?