I've got a tattoo

We finished painting the boys room but we're still putting it back together again. We still have to hang the curtains. While sorting through junk we came across a packet of Native American Indian symbol temporary tattoos that Adam brought home from America two years ago as a souvenir. I think he probably got them in Seattle.

I looked through them and found one that looked like a woman holding her arms up, fingers outspread, hair flying wild and a big circle in the middle of her face. Does the circle depict a wide-open, screaming mouth? My God! It looks a lot like me when I'm shouting at the kids! 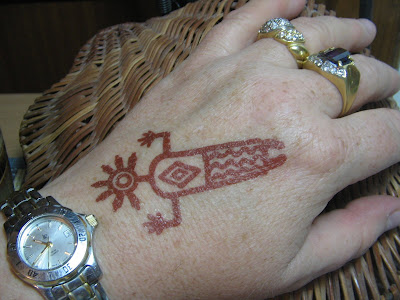 The packet had other symbols too. Mostly animals and geometric shapes and one was a character that was playing some kind of flute. But I liked the crazy woman symbol. I don't know what it really represents though. Has anyone got any idea? Or perhaps their own theory?