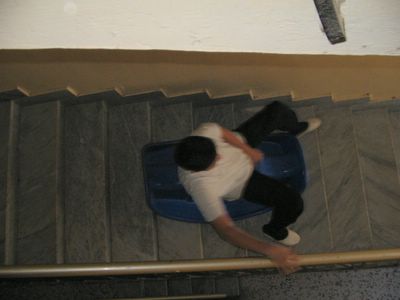 The noise in my house must be many decibels above what is probably considered safe. Not only is the television blasting in the living room, the girls have the CD player in their room going at full volume and the play station has a constant 'Vroom, vroom, vroom' with Driver being played non-stop, or so it seems.

Lately the boys have taken it one step further. When Ibrahim and Jenna were small I bought them a plastic see-saw toy; a 'zingy-da-da' as they call it here. They outgrew it long ago and I threw it into the storage room thinking eventually we would move to the farm and I could take it out if small children were visiting. The boys were digging around and found it and discovered that they could go all the way to the top of our building and sit on it and ride it down the stairs. 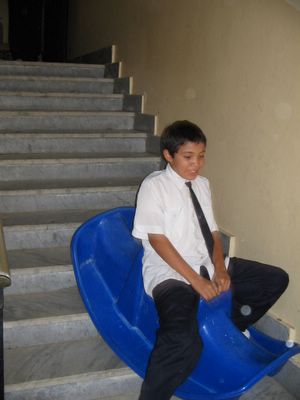 They've even invited the neighbour kids to have a go at it. They all arrive straight after school, still wearing their school uniforms. They've been riding the stairs for the past few days. You cannot imagine the noise it makes! It's become the latest craze, all the boys are addicted. I've threatened to throw away the zingy-da-da while they are at school so they've found a hiding place for it while they're away. 'Boys! I absolutely refuse to take anyone that's bleeding to the hospital in my car - so if you get hurt you are on your own!' I told them, but they just laughed at me. . . . sigh . . . I need earplugs!