How have mobile phones changed the lives of Libyans? 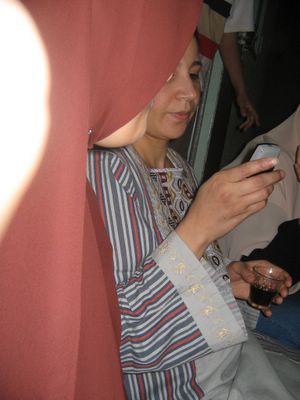 Nearly every adult in Libya owns a mobile phone and many have more than one. Nowadays, especially in urban areas, it is common to see small children with mobile phones. Phone shops have opened up and business is booming, with customers buying cellulars and all the accessories that go along with them.

Some reasons why the phones may be so popular is that obtaining a land line is often extremely difficult. In the past it wasn't unusual for someone to register for phone service and have to wait years for it. In some areas this is still the case. And then there was always the problem of having discrepencies with the phone bill itself, with many people finding themselves charged erroneously for calls that they had never made, oftentimes finding the bill hundreds and even thousands of dinars. Settling disputes over the bills was usually unsuccessful, most people just relinquished their phone service. This isn't a problem with a cell phone. Users can easily monitor their phone charges and purchase cards to recharge their accounts.

Service is not cheap. Opening an account requires 20 dinars for Libyana (and rumours abound that this fee will soon be lowered), with Almadar being somewhat more expensive. The expense accumulates as the charges per minute for calls is high. Telephones themselves can be quite costly, especially considering the average salary in Libya is so low. In order to save money, many Libyans buy used phones that had most likely been stolen. Cell phone theft is unfortunately a common occurrence throughout the country.

Life for Libyans has changed. Mobile phones can be seen being used everywhere. Social gatherings are often spent with everyone talking, or playing with their phones, and no one paying any attention to the people they are sitting with other than to impress each other by showing off the wallpaper they're using, and listening to each other's ringtones. Women at weddings spend the entire evening worrying over being able to hear their phones over the loud music. Phones with built-in cameras come in handy, enabling the party goers to record the event.

Phone etiquette is virtually nonexistent. Motorists can be seen everywhere talking while driving and fines for using a mobile while driving are seldom issued. People shout into the phones, allowing everyone in the vicinity to hear their personal business, and phones ring seemingly non-stop. Mosques are about the only place that is free from the noisy nuisance. Signs are posted at the entrances to most mosques asking worshippers to turn their phones off and these signs are usually obeyed.

Personally I hate mobile phones, I don't own one. Most people find it strange that I haven't got a cell phone, especially since I am so into all things technical, but I know that it's inevetable that I'll probably have one before the year is out. I'm not looking forward to it though.

Why, you ask? I feel that there really isn't a need for one. There are public telephone calling centers on nearly every main street, and in an emergency I can use someone elses phone. If I'm home I have a landline and at work I would have it turned off anyway. I'd also have the kids hounding me every time I was out; calling to ask stupid questions or to tell me about the fights they were having. I think I'd rather enjoy my few minutes away from the kids and be oblivious to the disasters awaiting me at home.