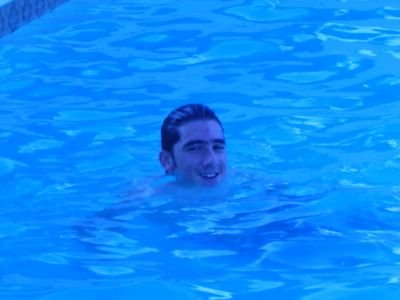 Adam's been living it up, swimming in my sister's pool, eating tons of junk food, going to the beach, shopping at the mall and going to movies. The funny thing is that since he's been in America, we've spent more time together. Just how is that possible? Internet of course - we talk more now than we did before. When he is here he's just complaining about not having any clean socks or how awful the my cooking is, but now he tells me what he's up to and what he's planning to do later. He also mentioned that he's doing his own laundry - Yeah! That means I don't have to ever look at his dirty socks again! Ha! Next time I hear from Adam he'll be asking me to remove his picture... hehehe.