Husien our worker with Ibrahim 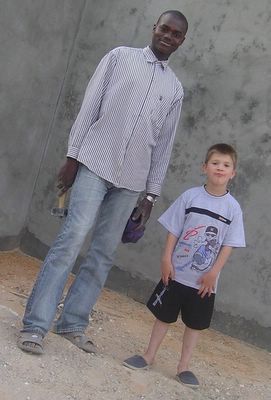 We have an African worker on our farm who is very friendly and a good sport. - If he can tolorate Ibrahim than that says something for him! I think he is from the Ivory Coast. Mustafa said Husien told him that he was engaged and he saved up his money to buy his fiance a mobile phone and had it sent to her - apparently she is in Mauratania. Mustafa said he even showed him her picture. He's a nice boy - and a hard worker (even though he is lovestruck!). He manages to keep everything in shape and mostly weedfree which is good because weeds are one of Mustafa's pet peeeves.