Mr Khaki at the hospital 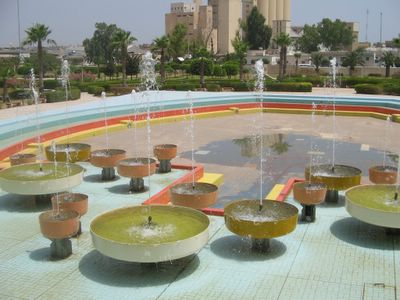 We've been running around just about everyday for the past two weeks doing various medical stuff. Yesterday we had an appointment at Tripoli Medical Center to see a specialist to get another opinion about Adam's teeth.

TMC is a huge hospital. It's reportedly the largest hospital in North Africa. It has this fountain in front and is surrounded by lanscaped gardens. The main entrance hall reminds me of shopping malls in the US. Marble, stone, multilevel and high ceilings. It has the same acoustics - a kind of hollow echo with the sounds of voices, footsteps and water fountains. The main hall contains a public pharmacy, gift shop displays, a snack bar and the offices of the various out patient departments as well as the guarded entrances to the in patient parts of the hospital. We sat and people watched while we waited.

Off to one side is a small courtyard that had been turned into a cafe. There's a fountain in the center that's surrounded by bright blue Pepsi umbrella covered tables. It was nearly one o'clock in the afternoon by this time and the place was deserted. I was attracted to the colour and play of light and shadow and decided to take a picture.

Out of nowhere appeared a 'khaki man' Traditionally, the security all seem to wear khaki and I refer to them all as 'Mr. Khaki'. He was not pleased that I was taking a picture and said it wasn't allowed. I pointed out that I wasn't photographing any people, just the umbrellas and that the place was deserted. My husband came up to see what was going on and Mr Khaki blabbed on and on and on and on, about how he had seen me taking pictures of the fountain outside and allowed it, but that taking pictures of the hospital was not allowed. My husband said, 'She's not taking pictures of people, only the tables and umbrellas, and besides it's not like a public hospital is a military installation or something. There are no signs anywhere that say taking pictures is not allowed.' I said to Mustafa (in Arabic so Mr Khaki would be sure to understand), 'Oh never mind. It's always a negative story here.' and we walked away to wait near the door of the out patient department.

About two minutes later another 'Mr Khaki' came - he was wearing the same uniform but it was a grey one, and with him were two plain clothes guys. Mr Grey was appologizing profusely to my husband. He said he wanted us to know that they are not negative and didn't want to give a negative appearance or impression. If I wanted to take photographs I could take as many as I liked but I would have to report first to their office and get special permission.

I imagine these khaki men have their work cut out for them. Nearly everybody nowadays has a camera. While we were waiting we noticed two other people taking pictures with their cell phones. I really doubt that everyone who decides to take a picture will want to waste half the day explaining why they want to take a picture and what they want to photograph to the head hancho of the Mr Khaki brigade before they can take their picture. By then the picture would be long gone anyway. 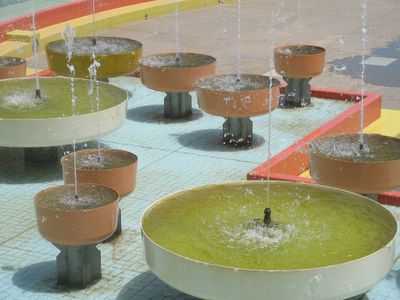 By the time we left the hospital I was hot, tired, hungry and irritable. The fountains that had looked so colourful in the beginning just looked dirty now. hhmmm... Thanks Mr Khaki! You really made my day!