Eid is officially over for me now. I've finished making the gadeed, which is a kind of jerky or preserved meat. I make it every year (and sometimes twice a year). It's really not that difficult and once it's made it will last unrefrigerated for a year or more. It never stays that long in my house because the kids go in and help themselves. Jenna in particular likes to snack on gadeed.
It's fairly easy to make. First you take the meat and cut it - opening it up as though you were filleting a fish so that the pieces of meat are flat and no more than a centimeter in thickness. You can also dry the fat from the sheep's tail in the same way. This is useful because you wont have to use as much oil in the final process of preservation. When you get the meat all cut you add salt and oil. It doesn't take that much salt - I think I used about a cup of salt for 20 kilos of meat. You can also add red and black pepper, turmeric, garlic and vinegar if you like. Mix all this up with the meat so that it's evenly coated.
The prepared meat is then hung on a clothesline or rack to dry taking care that the line is high enough so that cats or other animals can't get to it. You'll have to check the meat from time to time, turning it so that it dries evenly. Flies avoid the meat if it has enough salt and oil on it so if you notice that it seems to be attracting flies sprinkle it with a bit of salt and oil. If the meat seems a bit thicker and drying slower in some areas you can cut it open with a knife and add a bit of salt.
It should take a few days to dry, depending on the weather. Once it's dry  remove it from the line and cut it into usable sized pieces. Rinse the meat under clean running water to remove any dust and drain off any remaining water. Put the meat in a large cooking pot and heat it over a medium high heat until the water evaporates. Then add oil until it's nearly covered. Lamb tends to be quite high in fat so you will need less oil. Use a large wooden spoon to move the meat and make sure it's not sticking to the bottom of the pot. 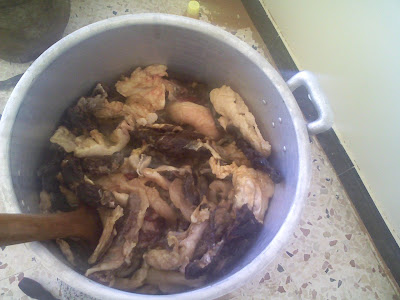 Boil the meat in the oil until the fat just starts to turn golden. Then remove the pot from the heat. It will continue to cook because it's still hot and bubbling. 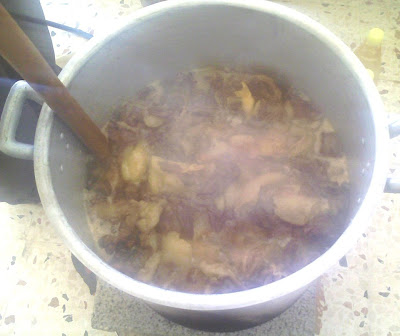 Strain the meat and place into enameled pots or ceramic or glass containers. Remove any of the pieces of fat if you like. Then pour the oil over the meat to cover it. Don't cover the pot until it has cooled completely.
Store covered at room temperature. Make sure to use a clean, dry, slotted spoon to remove meat from the pot. It should last approximately a year. When you cook with the meat make sure to adjust the salt and other seasonings. Remember that you only need a small amount of meat when you cook because once liquids are added to it it will reconstitute and expand.
Anyone that has another method - click on comments and let us have it!
- December 12, 2008