In my family in America Christmas is celebrated for the most part on the eve of Christmas. I think this tradition mostly began because my father was too impatient to wait for Christmas day. My father loved Christmas - I think it was a holiday he anticipated for months before the actual day. He truly had the holiday spirit. As a child I remember that we always opened our gifts at night and often times we had guests, but not always. On Christmas day we usually went to my grandmother's house.
When I was twelve we moved to Florida and slowly our tradition changed. Many people moved to Florida as we did, or pensioners retired to the warm climate of Florida leaving their grown children and other family members in the north. This separation from family is most noticed on holidays. My immediate family was in Florida but my cousins, aunts, uncles and the rest lived far away - too far away to celebrate with us. My parents began to invite people who were alone to join us on Christmas Eve. It became a festive event and no one felt left alone. My parents didn't invite just Christians, they invited people of all faiths and nationalities. The house was full of guests. Together we celebrated this special day.
In Libya Christmas is also celebrated, but not by Libyans themselves. Libya of course is a Muslim country but there are many Christians who live and work here. It's a regular working day for most companies. Even though it is a low-key event, there is still some evidence of the holiday.
I was invited to celebrate Christmas Eve with some friends. Of course I wanted to buy a gift and stopped in a gift shop that is near my home. The windows were open but the door was locked. As I turned to leave a boy who was standing nearby said 'Oh, they are open. You have to knock.' and he reached over and rapped on the door. It was opened by the shopkeeper who apologized to me saying that he'd had to lock the door because he was selling Christmas themed ornaments, decorations and gifts, and that was against the law.
Apparently, there has been a crackdown on non-Muslim holidays in the country. The fear that Libyans would begin celebrating Valentine's Day and Christmas has caused them to pass some kind of rules, or laws that shops are not allowed to sell anything related to these holidays. But they are forgetting that non-Libyans make up a great proportion of the population of the country. Shouldn't they be allowed to buy things related to their holidays? And what about people like me who want to buy something for a friend or colleague who celebrates? Especially that they were so kind to me for my holidays, Eid and the month of Ramadan. So sadly people resort to having to be sneaky.
With gifts in hand, my daughter Nora and I arrived at the address of my friend just as others were arriving. We spent a lovely evening with a group of people from many different nationalities and faiths all having come together to help our friend celebrate a holiday that was so dear. Many of the guests were here working in Libya. One woman found herself in Libya for a two week business trip and was invited so she wouldn't have to spend the holiday alone. I was truly honored to be a guest. It reminded me of how the day is celebrated by my family back home.
The house was decorated, candles lit, the story of the birth of Jesus was read and Christmas songs played on the stereo. Good food, company and conversation were shared by the guests. We all left shortly before midnight as many of the guests were heading toward Aldahara to hear the church bells. For the last two years the church in Aldahara has been given permission by the government to be allowed to ring their bells at midnight on Christmas Eve. They are also allowed to ring them on Easter. So twice a year the bells can be heard in Tripoli. 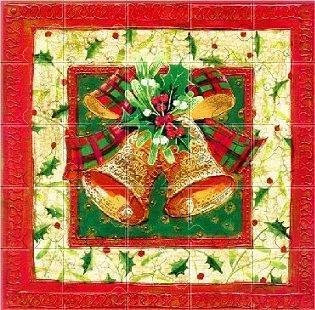