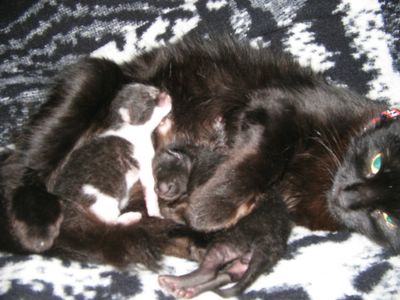 In the beginning she kept trying to have her kittens in my room in the closet, but I kept shooing her out and putting her in a box outside next to the door in the stairway. She finally just had them there but the next day she decided to move the two survivors into Ibrahim's closet. We finally gave in and moved Ibrahim's clothes out so she could have it all to herself.

This kept her happy for about two days. Now she has decided that she wants to share her offspring with the kids and has moved them into Nora's bed. The last time she had kittens she kept putting them in Jenna's bed in the middle of the night. This resulted in Jenna rolling over one of the kittens and inadverdantly killing it. It was a traumatic experience for poor Jenna.

We'll put them back in Ibrahim's closet, but I don't think she will leave them there. Anyone got any suggestions?