It was my birthday yesterday. Actually my friends have been getting into the birthday spirit for more than a week before the actual day. They started giving me presents early!

Syd got me a bottle of perfume... Romeo Gigli, an Italian scent that she swears she's been searching for in Libya for years. She made me put it on my list of things to ask for anytime I entered a perfume shop. I finally found it for her in a shop near the Mahari Supermarket in Dahara and she went the next day and bought two bottles of it; one for her and one for me. It smells kind of like Joy but more intense and it increases in potency as you wear it. It's really WOW! I told her they should rename it to 'Sex in a Bottle'. So now you have an idea of what I smell like (at home of course).

Tara made a recent a trip to Malta and came back with 'The Libra'; a black framed, black velvet background of a pewter goddess of justice holding high above her head the balanced scales. It's sitting on my desk waiting to be hung up. The goddess of justice is naked has this wild long hair that covers all the private bits. And the scales are perfectly balanced. Tara and I have a running joke about my Libraness, so it's perfect!

Those two surprises I got before my birthday. On the actual day I had a nice peaceful morning and then Tara and I went out for a trip of shopping and something to eat downtown.

While we were looking at something in front of one of the shops and the shopkeeper came out to assist us. He had short black hair and in direct contrast sported a long red beard and moustache. Tara was totally captivated and instinctively reached up and touched the man's beard. The poor guy nearly fainted! He said, 'Ya satir! Ya satir!' I couldn't help but laugh. 'Don't touch people Tara, especially men. ' I told her. The man recovered himself as I explained to him she meant no harm. She had just found the colour difference so amazing and wanted to know if it was real. He assured me it was natural and not henna. It was a funny experience in culture differences. It seems I am forever having to point out cultural faux pas to Tara. Being married to a Libyan and living here so long these things don't even dawn on me anymore, but then when I go out with an ex-pat I'm reminded how different our cultures are. Another one for the list... Ladies! don't stroke a Libyan man's beard unless you're married to him, or he's your brother or father! Hahaha! I don't think I will ever forget the expression on that poor man's face! After shopping we stopped in at the Corinthia and had a pizza. It was yummy!

When I got home my son Yusef presented me with a box covered in foil wrapping paper that had red hearts printed on it tied up with a red ribbon and bow. As he handed it to me he gave me a kiss on both of my cheeks and one on my forehead. I unwrapped the package to find a bottle of perfume. Yusef had been saving up for it. Which was more precious?- the present or the way it was presented? Where did that boy inherit his charm from? Oh, he makes me so happy!

Throughout the day friends phoned to wish me happy birthday and I got lots of emails too. My sister Holly mentioned my birthday in the comments of my blog and others joined in. Thanks for all of that!

In the evening we had cake. Not a whole birthday cake, but an assortment of pieces so that everyone could have something different. No candles because that might be dangerous!

Right around midnight came the final surprise. A huge moth managed to find its way into the house. It was the size of a small bird and it even made a kind of chirping noise. We weren't sure at first that it was a moth, we thought it might be a bird or a bat. There were lots of screams and shouts from the kids (mostly from Nora) as we tried to catch it. 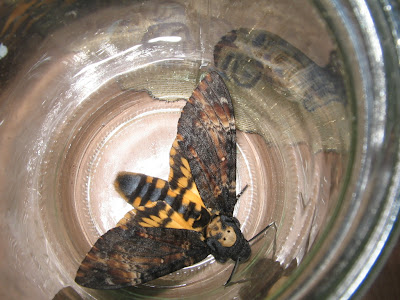 I'm not sure if the moth was meant for my birthday or not, and who sent it? Anyway, we put it in a jar and looked at it for a while before letting it go. It was an amazing creature. The most surprising thing was the chirping noises it made. Never in my wildest imagination would I have thought moths made noise. 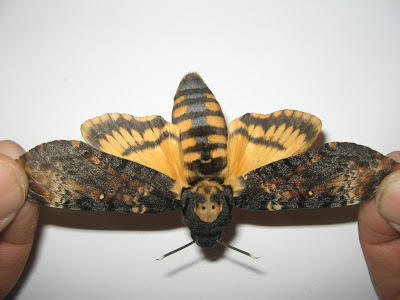 So that was my birthday. Thanks everyone for all the kind thoughts, gifts and birthday wishes. Now I'm ready to face another year!
- October 19, 2007