The last few weekends I've been trying to take the kids out and see what's available around town for them to do. A week ago we went to the zoo. Of course, we'd been there many times in the past but we hadn't been there for a while so we thought we would try it again.

We arrived at the gates to the parking lot and there seemed to be a huge amount of men of various ages hanging about and going in. Sometimes the zoo's grounds are used for exhibitions and such so I thought this might be the reason. Upon entering we found that there was indeed something going on, but of the unsavory sort. The place had quite a few families and women with their children, but mostly there were prostitutes and their customers hanging about - all of them busy bluetoothing - a craze that's emerging in Libya.

I decided that since we were already there we might as well make the most of it so we walked around to see what animals were there. Sadly, there were few animals (except the human kind) to look at. The cages and enclosures were mostly empty. The playground area was just crawling with creepy looking guys and most of the benches were taken over by 'businesswomen'. We didn't stay long. I was so disgusted that I didn't even bother to get out my camera. Maybe if the park made a rule that only families and males accompanying families be allowed entry this situation could be put under control and the park would become a nice place to take children again. As for us, we will avoid the zoo from now on except to possibly go very early on a Friday morning. 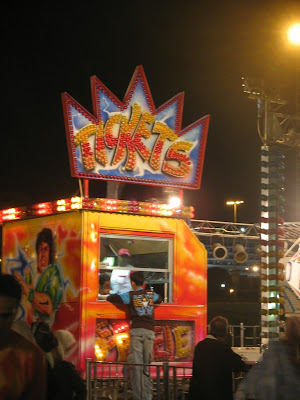 This weekend we decided to try the new amusement park along the seafront next to the port. An Italian company is behind this enterprise, the rides were mostly being operated by Italians. It was kind of funny to hear them shouting out in a mixture of Italian and Arabic - 'Meeya Meeya!', 'Pronto! Pronto!'.

There was a nice assortment of rides to suit all ages, some games of chance, fast food stands, cotton candy and popcorn, all set to really loud music, mostly with a strong techno beat (which I like!). The park was clean and there were benches to sit on as well and grassy areas that families could either sit in groups on the grass or at tables that were set up. 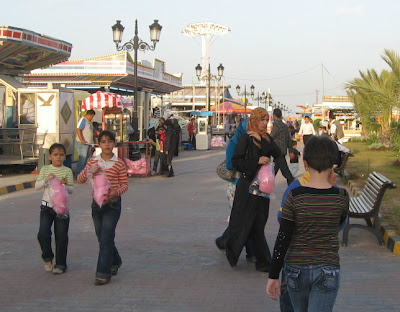 I did notice that most people were just watching the rides and not riding themselves. Each ride costs a dinar or a dinar and a half depending on the type of ride. Typical Libyans with their low salaries would find this very expensive. For example, I didn't see even one of my students there. I usually meet students where ever I go, but they tell me that they usually don't go to places like this because they've made the choice to spend their money on their education instead. Most of the visitors in the park were families with small children, young people and older people with their grandchildren. While we were there I didn't notice any obvious 'businesswomen' and there weren't a lot of middle aged and older men hanging about either. I did notice a police stand located at the entrance.

We'll probably return to the park in the future after we've saved up enough to enjoy more of the rides.

I found taking pictures at the amusement park challenging. The lighting and the speed of the rides were difficult to catch, especially as I had my kids to look out for a the same time. But I did manage to get some interesting shots. I'm usually a bit leery of taking pictures with people in them but for some reason no one seemed to mind. 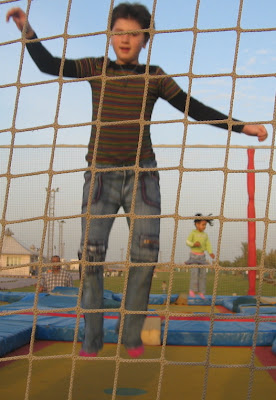 Jenna jumping on the trampolines - she really liked this a lot. 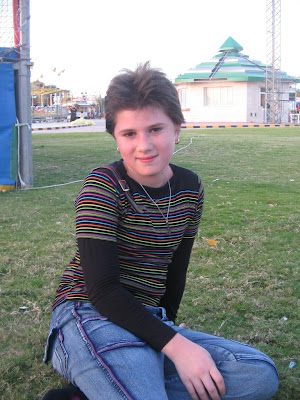 Red in the face and resting after jumping! 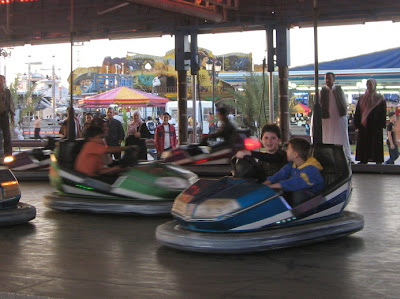 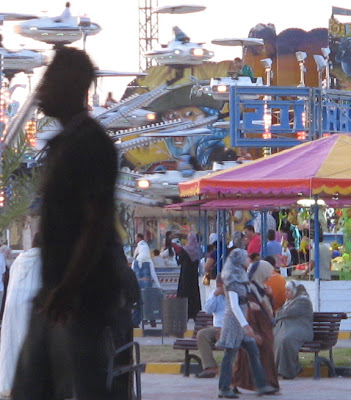 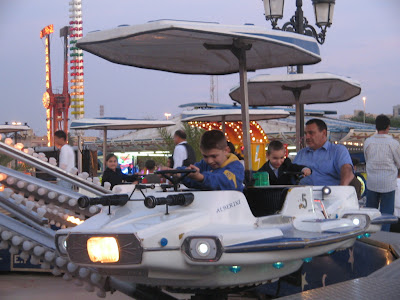 I think Ibrahim liked this ride the best. 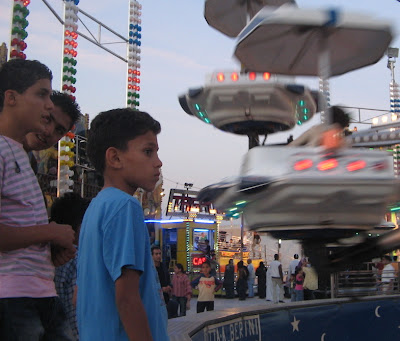 People watching and waiting. I didn't notice anyone pushing or shoving -a totally new experience for me here in Libya where that behavior is the norm. 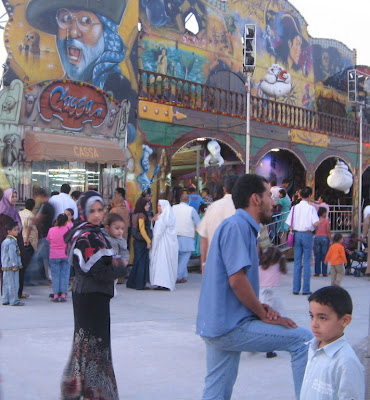 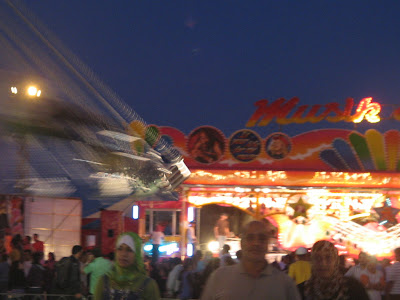 Jenna and Ibrahim loved the swings - they went so fast. Rode them twice. 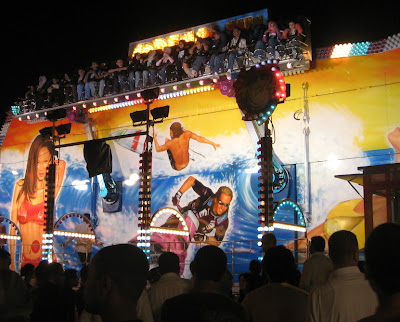 This ride looked a bit boring - just up and down and round and round. 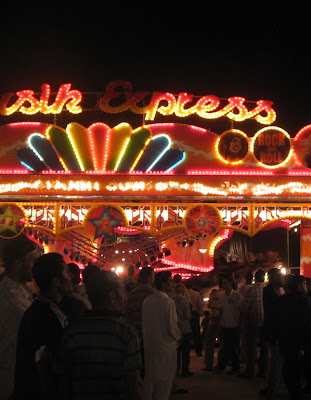 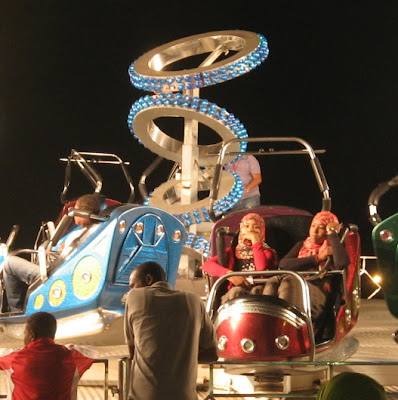 These two girls were waiting patiently for the ride to begin. 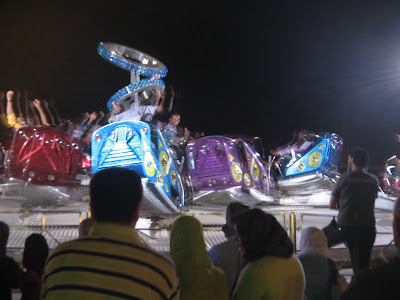 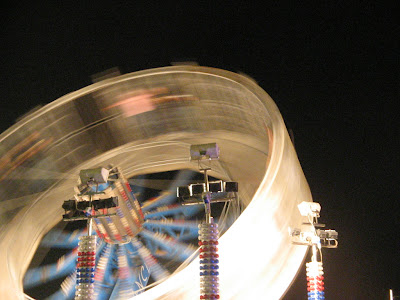 I've never been on this ride. 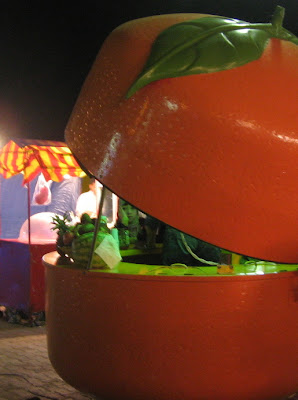 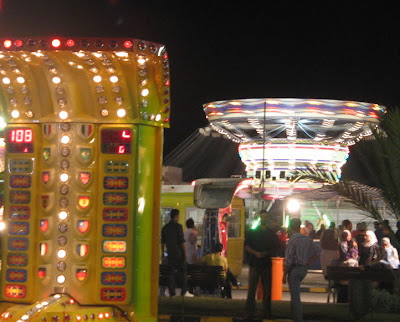