Every Ramadan I take some time to stop and remember my father-in-law. Actually I think about him more often than just once a year, but he died during the month of Ramadan in 1996 so the month makes me think back and mark his passing.

When I first came to Libya my father-in-law wasn't particularly thrilled with me. I think the whole idea that he was stuck with a foreign daughter-in-law just kind of ticked him off. Just shaking my hand seemed a huge effort for him. But seeing that my first year in Libya was spent living in the family house we were forced to get to know each other. There were good times... and there were bad. I swear that was the longest year of my entire life.

Once I nearly killed my father-in-law. It was kind of an accident that marked a turning point in our relationship.

Being stuck living with the family and only having one small room was pretty miserable. I was going through culture shock and hubby was going through re-entry shock. These were trying times and because we had little if any privacy it meant we couldn't yell and scream at one another to get it out of our systems. I quietly steamed away wondering why in the hell I ever decided to come to Libya in the first place. I found sitting with the family day in and day out extremely boring so a lot of the time I would just stay in my room either writing, reading (the same books over and over again) or listening to a small cassette player that I had brought with me from the US.

This pissed the hell out of hubby. He seemed to think I was being anti-social and he decided to break the cassette player - thinking this would just make me have one less thing to do alone in my room. Well, there was no privacy to have a screaming battle but there was still revenge to be had. I waited for hubby to leave for work the next morning and carted his stereo system up to the roof and tossed it over the side. I leaned over and looked four stories down, satisfied to see it was completely broken. Then I went downstairs to the kitchen and made myself a celebratory cup of coffee with some nescafe I had managed to hide away for myself (there were 14 people living in that house and the only way you could keep anything special for yourself was to hide it).

As I was pouring the hot water into the cup my father-in-law stormed into the kitchen. He was white as a ghost and furious, holding parts of the broken stereo system in his hands. He shook them in my face and demanded to know if I was the one who had tried to kill him. It turned out that he had been standing in the carport area below the building and the sound system had landed about two feet away from him. It could have landed on his head had he taken a step out but instead the fright nearly gave the poor man a stroke. I explained why I had thrown it off the roof and I asked him, 'How was I supposed to know you were standing down there?'.

I gave him my coffee and we made up. I think he felt sorry for me. When dear hubby came home and found the broken sound system he was not pleased but my father-in-law told him off and the whole event was pushed aside. Thus marked the beginning of my friendship with my father-in-law.

Over the years we became very close. He was retired but worked on the family farm everyday. One of his favourite things to do was to go into the fields and cut fodder for the cows and sheep. I often picked up a sickle and followed him into the fields where we would work together and talk. He told me about stories of his life or we'd talk about our fears, current events or the future. Sometimes we would just work together in silence and oftentimes he would sing, always the same song; the national anthem during the king's reign.

He suffered from diabetes and hypertension which in his later years caused him to have heart problems. We had long since moved out of the family house and into our own apartment in another area of town but every time we went to the family house for a visit my first stop would be to check on my father-in-law. If he wasn't busy we'd have a nice chat and then I'd go off and sit with the women. One visit he told me that he wasn't feeling well and thought he would be going into the hospital that night. After I left him I found my husband and told him what his father had said. He went to see his dad but came back and said his father was fine. Sure enough, later in the night my father-in-law asked to be taken to the hospital. He sent word that I wasn't to visit him in the hospital. I went off for a walk and found a smooth rounded stone the size of my fist. I gave it to my husband to take to his father because I knew he wouldn't be able to wash for prayers but he could use the stone to perform his ablutions symbolically. The kids took out their crayons and drew pictures for their grandfather.

After a week and he insisted on being released from the hospital and taken to Tunisia. He came home before leaving for Tunis and the family gathered round to see him. I was able to spend some time alone with him. He told me he wanted me to take care of the kids and look after his stubborn son. He begged me to be more patient with the family and attend all the weddings and occasions even though he knew how much I hated the events. He told me he was going to die and we would never see one another again. He told me to fear only Allah. We said our goodbyes. He didn't say goodbye to anyone else. He had a heart attack and died within minutes of arriving at the hospital in Tunisia.

I'm really lucky to have had such a good relationship with my father-in-law. I have found that it is a pretty rare thing indeed.

OK... you can stop crying now! 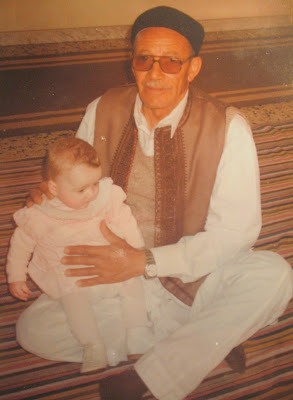