Ramadan began in Libya today. Apparently a day earlier than everywhere else in the world except an area of Iraq. Most other countries will start fasting tomorrow.

Last night the traffic in Tripoli was horrendous and the supermarkets were packed with entire families. It was crazy. I've had all my shopping done except for the vegetables and meat for about two weeks. I took the kids out for a drive last night just to watch the madness. Just getting into a parking area of a shop we often go to was almost impossible. Inside they had added an extra cash register to try to handle the crowds (but it didn't really make that much of a difference). Why on earth people had waited so late to do their shopping is a mystery to me. But the kids and I enjoyed watching them all. We drove around town at a snail's pace. The kids chose oldies from the 70s to listen to and we stopped and got shawarma on the way home.

Other than the God awful Libyan soup, I don't cook many Libyan dishes during Ramadan. We tend to eat pretty light, keeping to rice, baked chicken and various salads. Nothing fried and none of those time consuming (in my opinion time wasting) dishes are prepared. And I cook early so I am out of the kitchen by 2:30 or 3. Thank God for the invention of the microwave!

As a rule Libyans eat sitting on the floor in the sitting room - in front of the television. Not in my house - in the kitchen, on the table, everyone has a separate dish (and we use proper silverware). My kids and husband complain from time to time, but there are just some things that I refuse to budge about. They are more than welcome to go spend Ramadan elsewhere and occasionally they do go to a relative's house to eat. Then they come home with stories about how so and so's bratty little kids spilled soup on the carpet and how their cousins grabbed up all the pizza and stuffed themselves. It's interesting living in a multi-culti household sometimes.

After eating my kids like all Libyans always watch television. I think Ramadan is probably the only time of the year that anyone ever watches the Libyan channel. They put on all kinds of special programs during the month and they are not necessarily religious ones either, usually comedies and other fun things like a Libyan version of Candid Camera. Today they had a comedy with a typical family in Ramadan: 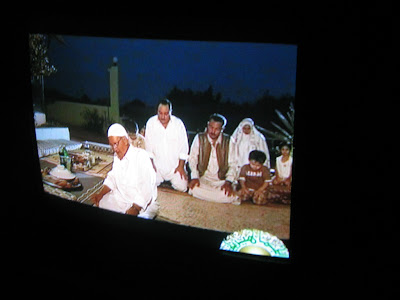 Praying together before eating. 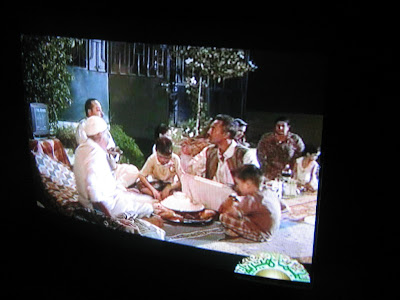 Eating at trays on the floor. Notice the men have a separate tray from the women. 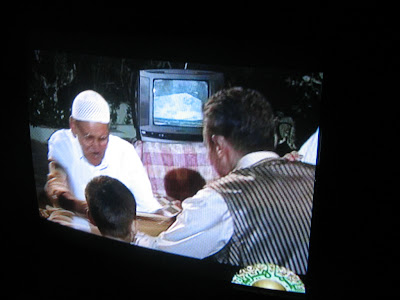 And of course the television is blasting away the entire time .....
Happy Ramadan!