A relaxing evening out

Last Thursday morning I said to the girls 'Let's take your grandmother out for an evening at Nadi Awil' and they thought it was a terrific idea. Jenna got really excited and said she wanted to invite her cousins too. She got busy making phone calls. First she called her grandmother who said she would love to go out but said she was fasting. 'Can you pick me up after sunset?' she asked. Jenna assured her that we would come pick her up after I got off work. It would be after sunset by the time we got to her house. She would have plenty of time to have something to eat before we got to her house. Then Jenna called her cousins and invited them.

After work I went home to drop off my bags and pick up the girls. We drove to my mother-in-law, 'Hajja's', house. The cousins live in the same building and they were eagerly awaiting our arrival. I sent Jenna upstairs to tell her grandmother we had arrived. The kids were all piling into the car - some of them squeezing into the back of the hatchback... hehe.. this was going to be a typical Libyan-style outing with a carload of kids.

Hajja got to the car and saw all the kids, 'Why are they in the car?' she wanted to know. 'Jenna invited them to come along.' I said, opening the door for her. 'Is their mother coming too?' she wanted to know. 'No, she's not.' I replied. My mother-in-law muttered under her breath as she was settling herself in the front passenger seat, 'Hmmph! She just wants to have a quiet evening at home without her kids.' I got a strong impression that she wasn't too happy with that particular daughter-in-law, but I wasn't going to ask about it.

Off we went. The cousins started arguing and fighting immediately. I drove along trying my best to concentrate on the road. We got to the Nadi and the cousins argued and fought as they tumbled out of the car. The Nadi is a kind of club that has a park area for children, cafe tables with various kinds of fast food available. There is an entrance fee to get in and they only allow families and women - no unaccompanied boys. It's a safe, clean place for the kids to play and has a relaxing atmosphere for adults. 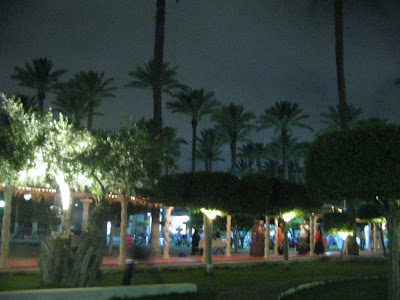 It's a but blurry, I should have taken out my tripod - but I was lazy.

It's a little on the expensive side for most Libyan families. For example, just for the entrance fee we paid 16 dinars... add overpriced food and drinks to that and it's a bit much. But I imagine that keeps out the riffraff. Unless you have people like me who bring cousins (riffraff) along with! They were embarrassing.... sigh.. My mother-in-law kept pointing out: 'This is the last time they come out with us.' and 'We're never taking them again.' When she said 'I'm glad their mother isn't here because it would only be worse.' I nearly burst out laughing. I don't want to know what my sister-in-law did to make Hajja so disgusted with her.

Hajja is getting old and a bit set in her ways, especially since she started going to the mosque to study. She wasn't thrilled with the zimzamat (traditional female singers) that were singing, but she didn't seem to mind when they switched to regular Arabic music which wasn't played very loudly. At a table near us some girls started smoking and she found that shocking. I pointed out that they were not Libyan. From their accents we deduced that were from Syria. After a while she relaxed and we enjoyed ourselves. The weather was pleasant and the kids had fun running around and playing on the playground equipment. Hajja and I took a short walk around, but mostly we just sat at our table and chatted.

At a little past midnight we rounded up the children and headed for home. 'Next time don't invite the cousins' said Hajja. I think she would appreciate taking no kids at all... I know I would. 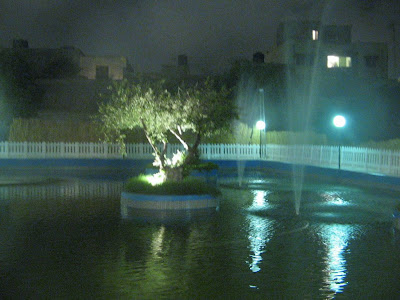 In the morning the phone rang. It was one of my sister-in-laws (not the mother of the cousins). She NEVER calls me. She wanted to know all about our evening. I just told her we had a nice time, not giving her any details... lololol..