Today started out as a normal day. I had an appointment to be someplace that in the end turned out not to work out. It was a matter of crossed emails, or emails that went unread (not by me). Of course one thing I have learned about living in Libya is that you never walk out the door without having a PLAN B, and possibly a PLAN C too. So I decided it was time to pull out good old PLAN B.

I called Tara, told her I was on to PLAN B, which was to take her out to breakfast at a place we call the Libyan IHOP, but is actually named O2. They serve an assortment of pancakes and sandwiches and it's right on the beach. I went to get Tara and we decided that since the weather was so nice we'd just go in her Jeep and enjoy the breeze.

We had a nice time eating breakfast. Tara was of course all the while busy playing on her phone. 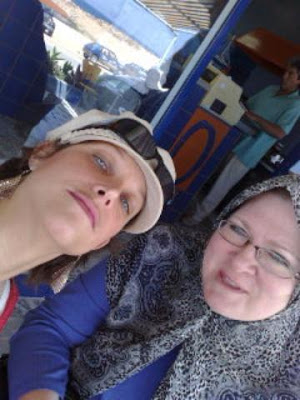 BFF @ Libyan IHOP!
While we ate our breakfast we discussed what else we needed to do to complete PLAN B. We decided we'd hit Marks and Spencers and see what was on the racks. We parked the Jeep across the road and went in. There is a pretty good assortment of clothing in the shop and the prices are actually pretty good too. Since Tara and I don't share the same tastes in fashion we both went off in different directions.

At one point I turned to look to see where Tara had gotten to and saw that an old man was following her. He looked creepy; shabbily dressed with really beaten up shib-shibs. This guy did not fit in with the typical Marks & Spencer shopper's profile. I watched him for a minute to see what he was up to. He was definitely following Tara around the store. I walked up to Tara and as I was about to tell her about her admirer she said 'That guys following me around the store'.

Tara continued to look at clothes and I did the same, all the while keeping track of the guy we decided to name 'Creepo'. He was definitely following Tara around. I assumed that it might be because she was wearing shorts. Creepo would get close to Tara but he never touched her. I decided to play his game and follow him around. I planned to clobber him with the nearest mannequin if he touched Tara, or anyone else.

At one point I turned and looked straight at Creepo's face - he had red, bloodshot eyes. He knew we knew, so he slowly made his way to the store's entrance, stopping periodically to look at the women's clothes on display (as if he was buying?). I continued to follow him out. I waited in front of the shop's doors and watched him. Creepo crossed the street and stood next to a rather beaten up looking truck that was double parked next to the Jeep. He spent about a minute looking up and down the road, at me and at the Jeep. I wondered if he was planning to take anything from the Jeep. In the end, he finally just got in the truck and drove off. I went back in the shop to find Tara.

Tara paid for her purchases and as we walked out the store I told her about Creepo's behaviour in the street. We decided to consider it an encounter with some weirdo and forget about it.

Our next stop for PLAN B was to pop over to a strip of shops in Gorgi. There is one particular shop we go to that we've named TJ Maxx. It has an everchanging assortment of name brand clothes that can be bought for huge discounts. We were in there for about two minutes and I turned and looked up, straight into Creepo's face.

I walked over to Tara and said 'Our friend is here.' Tara said, 'No way!' and I said 'Yes, I'm absolutely sure it is him'. It was a repeat of the scene from the previous store. This time the guy just wandered around the shop, looking at clothes and watching us - while we watched him. After a bit of this game he walked out the shop and we followed to see him get into his truck and pull it around and park it so that he could follow us down the road when we left.

We got into the Jeep and decided to drive down the road a bit to where there are some cheap shoe stores. Creepo of course followed along behind us, but some cars managed to pull in between us and we didn't see him. We got out and went into the shoe store. The smell of glue in those cheap shoe stores is overpowering. After a few whiffs of the glue you're hallucinating into thinking the gaudy shoes on display are beautiful and you willingly part with your money. Creepo didn't appear in the shop. Tara bought some glitzy looking sandals and we headed back to the car.

Lo and behold! Creepo! Parked on the road in front of us! I had had enough and marched straight over to the truck. 'What is your problem?' I demanded. 'No, no problem. I don't have a problem. I'm just working. I'm just doing my work.' replied Creepo. He held up a big wad of cash. I told him to leave us alone and stop following us. Then I walked to the front of the truck and pointed to the license plate and read off the numbers in a loud voice to Tara. We turned and walked back to the Jeep. As we pulled out we took Creepo's picture (mobile phones can be useful things!). He held his hands over his face and said 'Sharika, Sharika.' (Company, company). 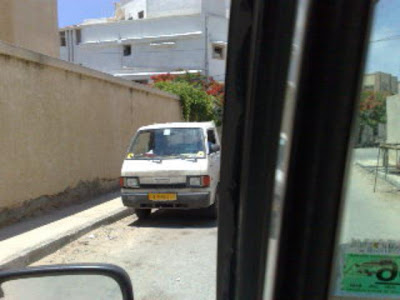