A little over a year ago I gave Tara one of our kittens. She's a cat person but had left all her cats back home in the care of her mom. Something was missing in her life and I decided it was the lack of a cat. So I gave her one. We had recently returned from our first visit to Nalut's Spring Festival so she decided the most fitting name for her kitty would be Nalut. 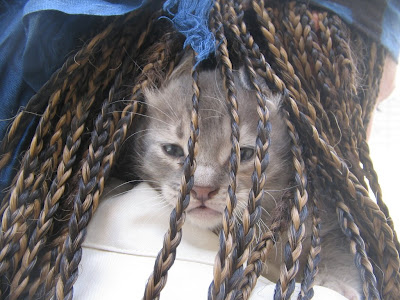 Nalut as a kitten with Tara's braids.
Nalut is a Libyan cat. Rough, tough and a bit on the wild side. She's the daughter of the belated Anbah who was one clever cat, so it is just natural that Nalut has inherited some of her mother's ingeniousness.

This morning I got a phone call from Tara and she told me that yesterday Nalut got out of the house and came home without her collar. It has a bell on it so you can hear Nalut as she scampers around the house and plays. She looked all over the house and garden but never found it. 'What happened to your collar?' Tara wanted to know. She gave poor Nalut a scolding about being a bad kitty and losing her collar.

The next day Tara heard the tinkling of Nalut's bell. In padded Nalut carrying the collar in her mouth. She dropped it on the floor for Tara to see. 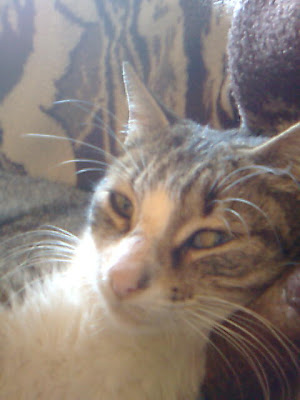 Anbah, Nalut's mother.
I am not surprised that Nalut is so clever since her mother, Anbah, was one of the most intelligent felines I have ever met.
- June 20, 2008