We finished lunch and decided to go to the farm, as we had planned. Of course as soon as we walked out of the house it started raining but we decided to continue on regardless of the weather. Enough of the house... we desperately needed to get out!

The past few weeks I have noticed that one of my tires has been losing air. No amount of nagging would get hubby to take it to have it checked out. Today was the day it decided to go flat - thankfully we made it to the farm and it went flat as we pulled into the driveway. It also stopped raining at the same time, so Yusef got to work changing the tire.

Last week Yusef found an injured hawk and he's been taking care of it. Some fool had cut off most of it's wings in an attempt to keep it from flying away - but it managed to escape anyway. Yusef is going to keep it safe until it can fly again and then he will release it. Hopefully the damage to it's wings won't be permanent. Why does it seem that Libyans always treat animals so cruelly? 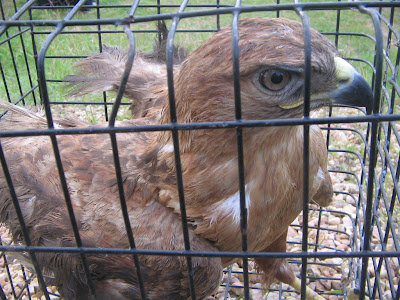 [Click on images for enlargement]
I took a chance while the weather cleared a bit to take a walk. The kids were busy with the tire and the hawk. One of the dogs came along to keep me company. He was sniffing in all the greenery. The recent abundance of rain has resulted in the wildflowers coming in thicker and taller than I have ever seen them before. Too bad the fields were plowed up last month - had they been left there would have been a thick carpet of flowers and grasses. 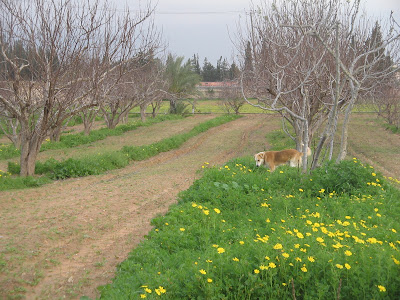 Every year the yellow flowers appear first. Next will be purple and then pink. I noticed two red poppies but the rain had damaged their petals and they weren't pretty enough to take a picture. 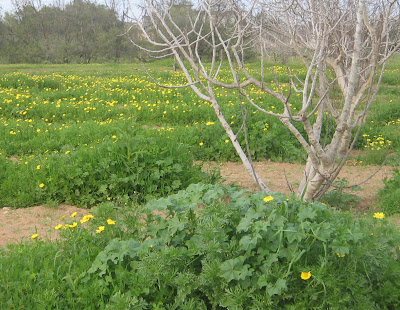 I walked through the trees and noticed the first bud. Spring is around the corner. 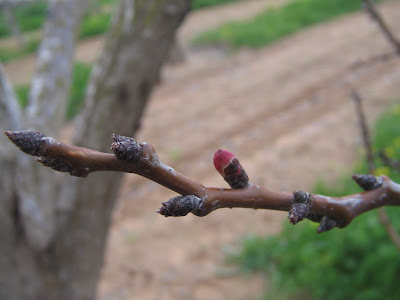 The dog and I walked back towards the house. Yusef had taken the tire to be repaired and had returned and put it back on. As soon as he'd finished the rain began to pour down again. After a bit we piled back in the car and came home. The fresh air had been good for us. We were all in a better mood.