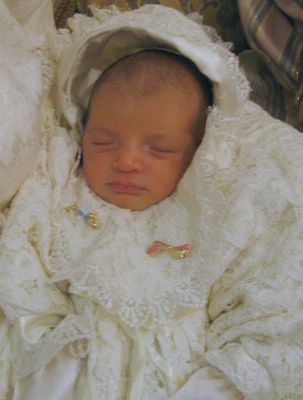 The other day I recieved a phone call from one of my friends announcing that her daughter had given birth to a girl. It was her first baby and they were having a 'sboah' in honor of the event.

When I first came to Libya seventeen years ago, 'sboahs' were quite different then they are nowadays - in those days the party began in the afternoon and finished a little after sunset. They served almond drink (rosata) with almond macaroons (ubumbar) and the traditional three glasses of tea with sweets. Then you got dinner - depending on the family or area it could be cous cous or rice. Some families served asida, which is a cooked dough served with honey or date syrup, or you might be served a kind of super-protein mixed bean and meat stew flavoured with fennugreek (called helba).Those days most women came wearing traditional Libyan dress.

Things are different now. The party is often held at a rented party hall and begins after sunset. Every table has it's own pot of tea so you can serve yourself. About the only thing that has remained the same is the almond drink and macaroons. Dinner is usually rice pilaf with about four different things on the plate such as savoury pasteries, stuffed green peppers, small individual lasagnas or quiche. These days they are adding western style potato salad made with mayonaise. It's rare to see anyone wearing traditional Libyan costume - the ladies all prefer to come wearing evening gowns. 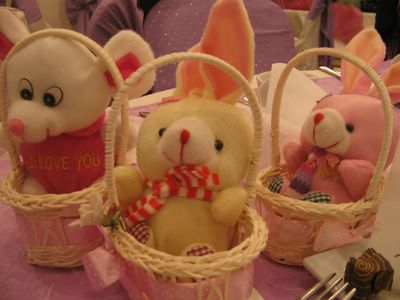 At every party you get some kind of party favour - this time it was cute little baskets with stuffed animals and a peice of chocolate tucked inside.

It had been a long day for me. I came home from work and got ready to go to the party. I took Jenna with me and I picked up a friend of mine and her daughter. We had a nice time. The music was traditional Libyan zimzamat and they would play two songs and then stop for a while so the ladies could chat and then start back up again. That's so much better than non-stop modern music that is usually played at these events. Still, I didn't get much time to visit with my friend and the new mother so hopefully next week I will go to their house for a visit. That way I can hold little Yasmin too. - oooh she's soooo sweet! Masha'allah!