An Afternoon in Sabratha 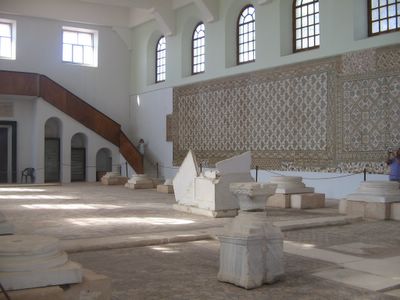 The last few weeks have been really busy ones. Running back and forth to doctors etc. Today we had a nice break in routine. My husband's cousin came for a visit to Libya with his wife (not Libyan) and children. They come every year but amazingly they've never visited Sabratha, so we decided it was time to take them for an afternoon exploring Sabratha.

We started out about 9:30 am and stopped for the morning and lunch at my sister in law's house, as she lives along the way. Then after lunch of traditional Libyan cous cous, we set off for Sabratha.

I've been to Sabratha many times and this time I decided to try to focus on one aspect. I wasn't sure what it would be and thought I would choose when I got there. Our first stop was the museum which houses some of the mosaics and artifacts taken from the Christian basilica. 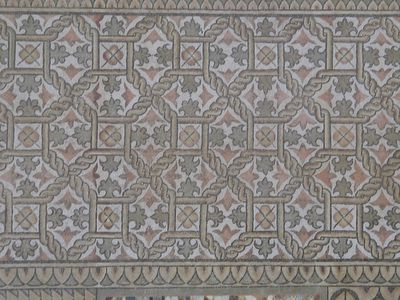 Huge mosaics are displayed along the walls of the museum. 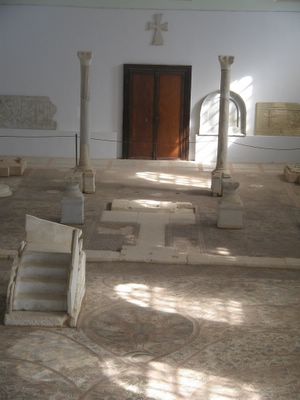 I think that the museum is supposed to be pretty much a replica of the basilica. On one side is a staircase that leads to a viewing platform so that you can look down and see the mosaic that covers the floor. 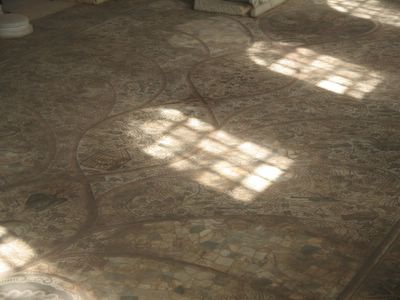 Unfortunately there are very few signs posted telling you about anything. My interpretation of the floor mosaic is that it's a representation of the tree of life with many kinds of birds and flowers interwoven into a branch design, possibly a grapevine. 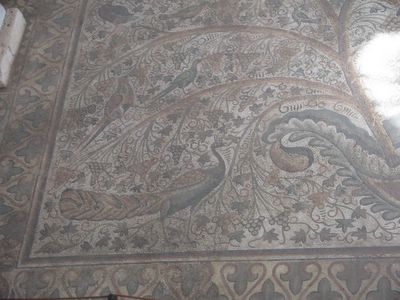 This is the bottom corner of the floor mosaic. Grapes and grapeleaves with different kinds of birds. I don't think peacocks are native to Libya so I don't think that the birds in the mosaic represent native species. 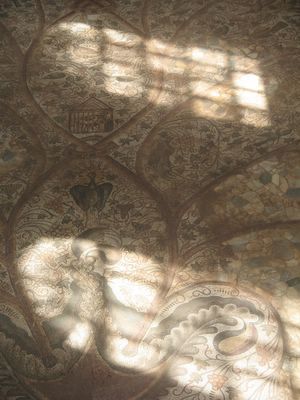 Another look at the floor mosaic in the museum. 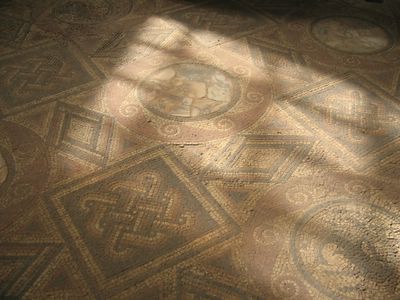 Another corner of the floor in the museum. I think that this is from a different mosaic because the style is not the same as the bird/vine mosaic. One of the problems with Sabratha is the lack of information. There are some signs posted but they are not informative enough. 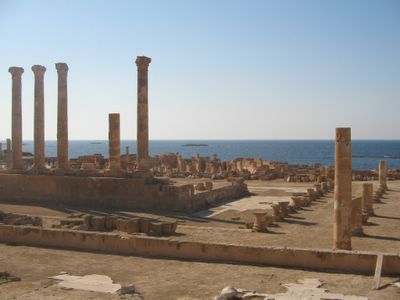 The weather was beautiful. We headed toward the sea.

Around the site there are signs posted in both Enlish and Arabic. This was somewhat useless as there wasn't anymore information posted and the site itself is large, with twists and turns along the way. It would really be useful if they could put some small information kiosks with maps in different locations, with a 'You Are Here' symbol so you know where you are and what you are looking at. 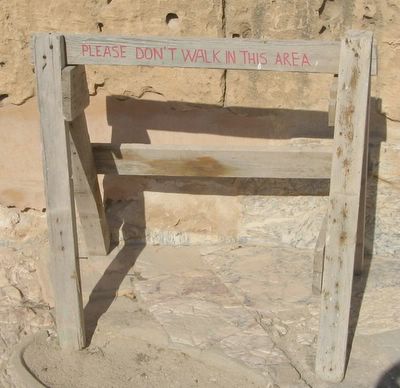 We had small children with us and we had to constantly watch out for them. There are many wells scattered about the site, many have bars covering them, but more often then not, they've been left open. You really need to pay attention. I think this sign isn't meant for the wells but for the reconstrucion work on the many mosaics that are open to the elements. 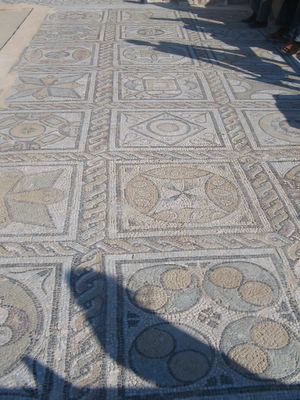 I noticed two areas that were designated as public baths. Both had beautiful mosaics. This mosaic is from the baths near the sea that are near the Olive Oil Press Road. There were lots of pottery shards scattered throughout this area, most probably from the amphorae that were used to store oil. 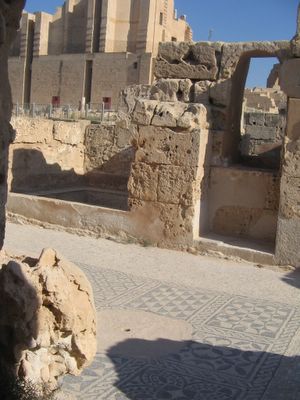 The second public baths area I found was the Theatre Baths which are next to the theatre of course. This area is full of mosaics too. 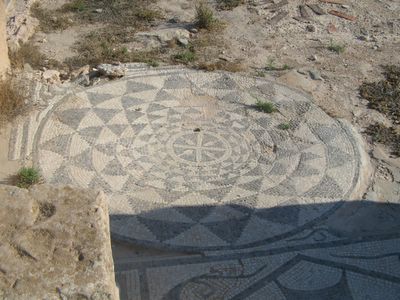 Another mosaic from the Theatre Baths. Libyans make a traditional covers for dishes that are woven out of palm fronds and the design of this mosaic reminded me of these. ||