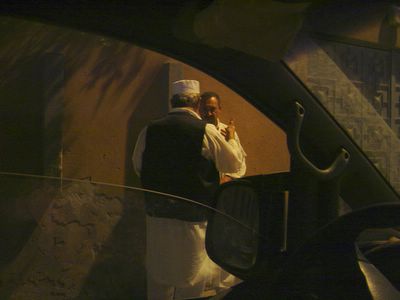 A little over a year ago my sister-in-law died of heart attack. It was sudden and unexpected. Her husband was devestated as he was so devoted to her - he was Amna's shadow - where Amna went Mohamed followed. So it was such a shock to the family that he married soon after her death. The marriage didn't last long though as the woman could not replace Amna in Mohamed's heart. He decided to try again and got married yesterday.

This is a picture of Mohamed and my husband having a serious discussion in the darkness. I was waiting in the car and took the picture because I liked the way the light looked. The picture was taken not long after he sent the first replacement for Amna back to her family. The whole situation makes me feel a bit sad. He will never be able to replace Amna - I wonder how long it will take him to realise that, and how many women's lives he will mess up in the process.