One of the weird things that I discovered when I came here was that 'old wives' tales' prevail. Libyans believe all kinds of weird stuff! Especially when it comes to being pregnant and having kids.
The list goes on and on....
One of the funniest things that happened was when one of my sister-in-laws visited me while she was pregnant and the kids brought out their toys. One of the toys was a rubber troll doll. My sister-in-law took one look and it and jumped up and ran out the door. She stayed downstairs at my other sister-in-law's house until her husband came to pick her up because she was certain that looking at that troll doll was going to cause her to have a baby that looked the same.
The weird thing was that one of my neighbours (who had seen the troll doll while she was pregnant) has a kid that looks like it! I've called that kid troll doll ever since she was born. She's about 10 now and still looks like a troll doll.  She doesn't have blue hair or eyes though - hers are brown but her hair is the same texture. And she has the exact same features. Now that's really weird! 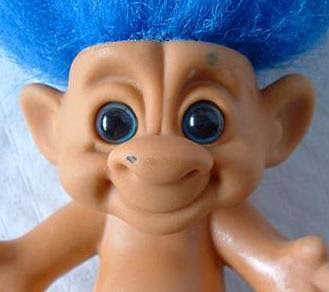 For a while I used to keep the troll doll in the entryway of my apartment, up on the top of the china cabinet. It was like a charm to ward off evil (or sister-in-laws!) lololol
Today I saw this fantastic two headed doll while I was surfing the net. I want this doll! This would be perfect to stick next to the troll doll! Where can I get one of these??? 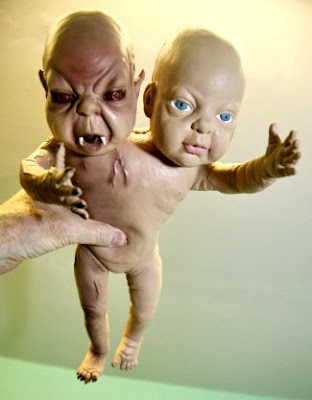