Last Tuesday I was visiting a friend in an office near the Corinthia in Tripoli and she asked me if I had felt an earthquake that morning. She said their whole building had been shaking and they wondered if there had been a quake - but then again there is alot of demolition going on and maybe that had something to do with the shaking. I hadn't noticed anything that morning.

Last night at about 10pm there was an earthquake recorded in the east of Libya (scale 4.3) not too far from Al-Marj. This is the same area that in 1963 suffered a 5.3 scale quake and resulted in the loss of hundreds of lives. 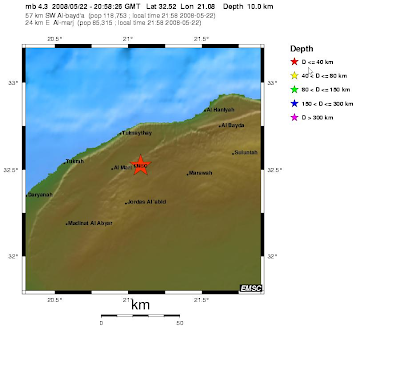 There have been many earthquakes throughout the history of Libya. The earliest records documented during the Roman period say that two quakes in 262 A.D. and 365 A.D, destroyed most of the temples and public buildings of Cyrene.

Libyans seem to think of only the east part of Libya when it comes to earthquakes. Most Libyans don't realise that Tripoli also has had it's share of earthquakes. For example; in 1183 A.D., a powerful earthquake destroyed Tripoli, killing 20,000 people. Mild tremors were felt in Tripoli in 1803, 1811 and 1903 A.D.

Are Libyans ready for the possibility of this happening again? Why isn't the public made more aware of what to do in case of such an event? Could Libyan health services cope with the demands? Are teams of people trained to deal with natural disasters? Or are they just going to sit back and say 'Whatever Allah wills will be.'?
- May 23, 2008