Sounds in the night 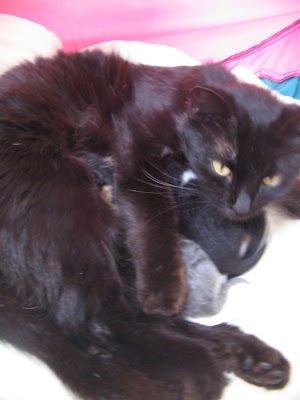 Last night I was awoken at about 3 am by some strange noises. Layla, the cat, was having her kittens. And as usual she was having them in Nora's bed. Nora had been sleeping but was woken up by the noise of little kittens saying 'Mew, mew, mew.'

The first time Layla ever had kittens it was in Nora's bed and she had complications - the first kitten was coming out feet first. Nora had to pull it out. Ever since then Layla has always gone straight to Nora when it's time to have her kittens. Maybe she thinks Nora is a midwife or something. 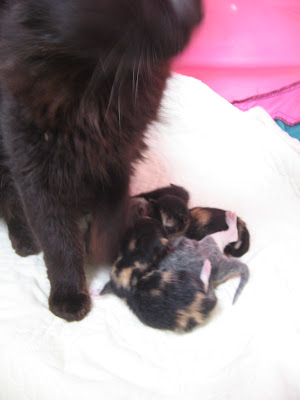 After Nora told me what was going on I told her 'Well, you know what to do. You handle it.' and then I went back to sleep. This morning I had a look at Layla and her babies. Nora had moved them out onto the balcony and put them inside a play tent that the kids have. Layla was proud but protective of her offspring. Four of them - two calico kittens which are definitely girls, a grey one, and a black and white one.