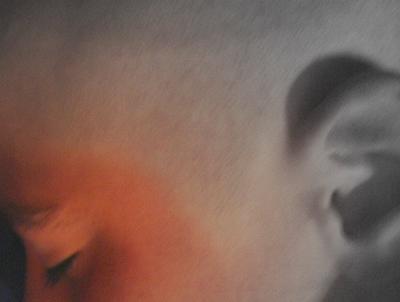 Yusef needed a haircut but was reluctant to have it done. He kept putting it off until his father got fed up with him and took matters into his own hands. The result was a shaved head.
In Libya it is pretty common for boys to have their heads shaved during the summer vacation. The weather is hot and it keeps them cooler. It's called the 'Garhah' cut - named after a large smooth squash called garrah. Soon all the neighborhood boys will be sporting this popular summertime bald look!
Yusef was pissed off about his new 'do' and wouldn't let me take his picture so I had to wait until he fell asleep. He looks funny with his face sunburned from a day at the beach and a very white, smooth head. But I like it! When you touch his scalp it's smooth as silk!
- July 15, 2005