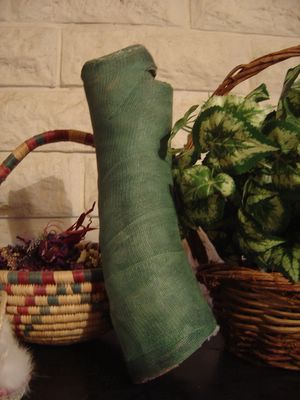 This weeks challenge was 'used', and this is Yusef's used cast. He has now cast-free! He was so fed up with wearing it that he pulled out the cotton inside wrapping, bit by bit, and then slid his arm right out. I think he did this mostly because he hated the saw they used to remove the previous cast.

His arm was shriveled and hairy with all this gross looking dead skin pealing off it. After a few days his arm started to regain the muscle tone and loose the shriveled look - he can't slide the cast back on anymore. He got a suntan on his arm while he was out riding his new bike. But he still has a very hairy arm. The kids are calling him Werewolf now instead of Yusef!

Does anyone want a used cast? Yusef has washed it with laundry detergent and shampoo, so it now doesn't smell bad anymore. No one has the heart to throw out Yusef's souvineer.

p.s. Special thanks goes to Dr. Magdi and the staff at Khadara Hospital - Tripoli, Libya. You all did a wonderful job taking care of Yusef!!!!
- July 02, 2005