A day at the beach & finally Tripoli gets some rain


Last Saturday my girls and I got together with some friends for a day at the beach. We went to a beach near Garabali and as we weren't sure about the situation on the road we all met up in the morning and convoyed out together - safety in numbers.

The ride out was uneventful and pleasant. There were only a few checkpoints, one we found interesting near Tajoura because it was made out of stacked empty shipping containers. We passed through quickly, the men manning the checkpoint were friendly and polite.

The day was lovely, the weather sunny and mild, the water warm. It felt so nice to be able to relax on the beach and enjoy the day. I hadn't seen most of my friends since before the war and some of them since last year - we had lots of catching up to do. 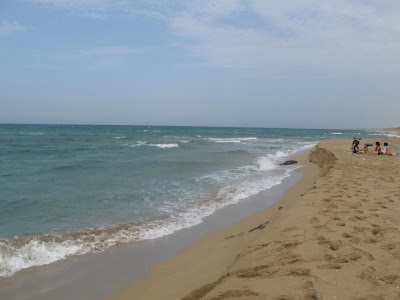 Jenna had arrived at the beach looking pale but within half an hour her cheeks began to turn red and her freckles popped out - like magic!

We had planned to leave at four o'clock, but as the ride out was uneventful we decided to extend our time at the beach, leaving as dusk was approaching. Again we passed through the shipping container checkpoint - this time at night.

Later during the week the weather changed. It got cooler and cloudy with some really fabulous thundershowers. Thunder and lightning while the rain poured down. It was as though the air were being cleaned of the summer. Finally it feels like autumn has arrived in Libya!

Usually toward the end of summer teams of cleaners set to work along the major roads in and around Tripoli. They open up the drain covers and dig out all the sand and debris that clogs up the works. But because of the war this wasn't done this year, the result was floods just as soon as the rain started to come down.

I got stuck in floodwater near the Fornaj Circle (recently named University Square). Everyone drove through carefully. I've noticed a change in the way most people drive nowadays; people are much more patient than in the past.

The war still continues in Sirte and Bani Walid.

Please keep Libya in your prayers!