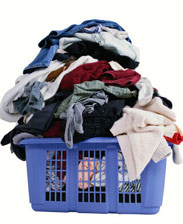 I woke up this morning to the sound of rain but it stopped after a bit. I really like rain, actually the only negative thing I can think about rain is the laundry. I only have a clothes line for drying clothes, no tumble drier - not that they don't exist here, I don't have one simply because the flat is too small and the electrical wiring not strong enough to handle the load. They weren't thinking about large electrical appliances when they built the flats over 30 years ago. So if it rains everything stays wet. Since I have eight people in the house to do laundry for I just keep washing and hang it out in the rain... eventually it all dries. If I stop doing the laundry it piles up too fast and I'd never catch up. So, rain or shine, there's always laundry to be done.

I remember once my sister-in-law had come for a visit and I had just taken all the clothes off the line and was sitting down to fold them. At the time she had two children, but only her son lived with her. She had sent her daughter to live with her mother because she said having two children was too difficult. She looked at the mountain of laundry and said, 'Wow! I can't believe you do this much laundry every week.' I replied, 'This is the laundry for one day.' Her mouth hung open and she said 'Really??' 'Yep, everyday it's like this.'

Imagine only doing laundry once a week! What would that be like? A while ago I made a schedule and said everyone would be responsible for doing their own laundry. Each person had their own day and I gave each person their own basket for their clothes. Did my plan work? Unfortunately, it did not. The kids decided to skip their specified day and let their laundry pile up. If we were living in a bigger place I would have just ignored that and let them deal with it, but with eight people living in a sardine can-sized flat it is just impossible to let mess and clutter accumulate. I gave in and started washing again.

Laundry will just be a life long ordeal... I suppose I could run off and join a nudist colony somewhere, but I don't think I could be so cruel as to impose my nakedness on anyone. lol