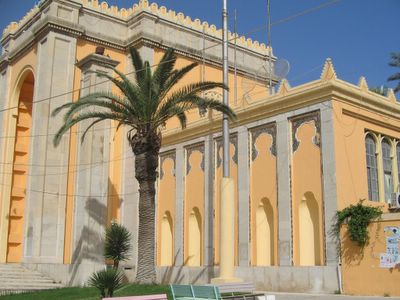 Recently I posted a notice about the 'Fight Hunger - Walk the World' campaign which is held once a year in cities all over the world. This year Tripoli was also on the list of cities that would take part in this global event. 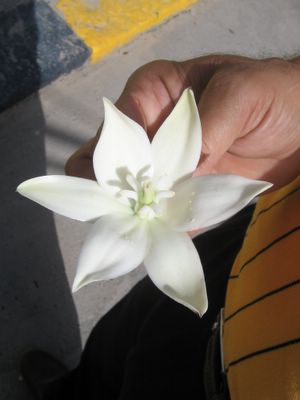 I went with my husband and two of my daughters and while we waited in front of the fairgrounds for things to start happening we found some yucca plants that were blooming, so we had a close up look at one of the blossoms. I'd never seen one up close before, it was pretty.

Only a few of the people who said they would meet up with us arrived. Everyone's main complaint about the event was that it was on a Sunday. But in most parts of the world Sunday is a day off work. Most Libyans were either working, studying, or sitting exams so I expected there would be a poor turnout. We didn't let that bother us. 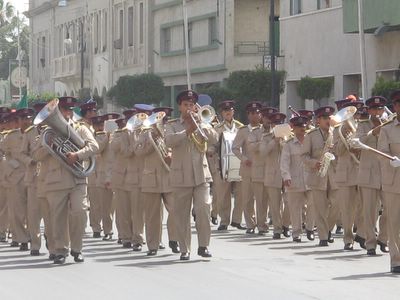 Finally, about an hour late, at five minutes to eleven, the 'Walk for Hunger' approached the front of the fairgrounds preceded by a marching band.

The walkers carried banners and flags. My husband complained because they didn't have a Palestinian flag and he said they are most certainly hungry. I told him 'I think there are hungry people in even the wealthiest of countries' - he watches too much Aljazeera - that and the heat were making him crabby! - I decided to ignor him. 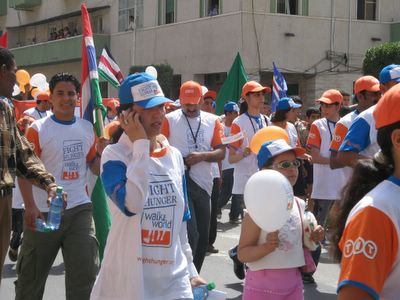 I took some pictures and then we followed along for part of the way. I must confess we didn't complete the walk - I had to get home and cook lunch and get myself off to work. Maybe next year the event will fall on the weekend. At any rate, I enjoyed seeing this and also meeting Molestine who showed up to take part in the event too.