The traffic situation during the summit that's being held here has really been a pain. They've closed off roads in all kinds of places and you have to plan your trip carefully to avoid getting stuck someplace. Was this the last day of this craziness? I hope so, because I've got a life to get on with.
More driving headaches are a bunch of new potholes in the main road that goes through Ain Zarah. Maybe I shouldn't call them potholes - they are more like trenches. And there are huge holes in the middle of the 'Khamsa Shwara' intersection. Someone suggested that it's turned into a roundabout. I don't know why they don't just fill in the holes. I guess they are waiting for a few people to get killed first.
In the Google Earth picture below you can see the brick place I drive past every day - see how the earth is red from the clay the bricks are made from?  The huge trucks that load and unload the bricks are eroding away the sides of the already narrow Ain Zarah road there so that cars have to veer towards the middle of the road to avoid falling off the paved area - usually they veer into oncoming traffic. In the picture you can see a dark area alongside the road on the opposite side where the road is crumbling away. I know it doesn't look like much at first glance, but compare it's size to the cars on the road. The trucks are not just loaded with bricks - they are OVERloaded and dangerous. Once I witnessed a truck flip over when it tried to turn in. There were bricks everywhere and by some miracle no one got killed or hurt. One day if I have a few minutes extra  I'm going to stop in at the brick place and have a word with them about it... they are the ones causing the problem in that part of the road, the least they can do is fill in the holes their trucks are creating - and make the road a little bit safer. Of course they will probably just look at me like I'm some kind of lunatic. Maybe I am... sigh.. 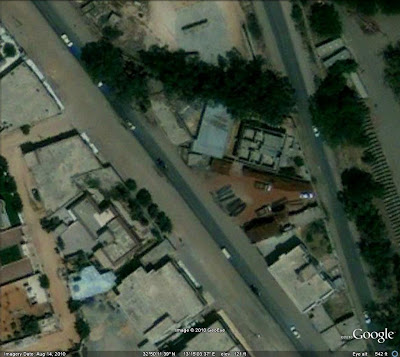 This picture was taken about three and a half months ago. It must be very early in the morning because there is hardly any traffic in the picture. The road looks much worse now.
I was exhausted by the time I got home today. I'm looking forward to the weekend. I think I'm going to crawl into my bed and stay there.
- November 30, 2010