My life is not so ho-hum afterall

Last night I had an adventure of sorts. My day at work was finished and we were on our way to drop my daughter's friend off at her house on the way home. I made it through the dangerous intersection at Benashur and Jaraba Streets - dangerous because the traffic light has been out since they started demolishing Jaraba Street and for some reason instead of putting a traffic cop there for safety they just leave everyone to fend for themselves. Libyans have no idea about the concept of turn taking. They just all try to push their way through the intersection and it's a snarled up mess with angry motorists yelling and glaring at one another as they weave their way through.

Further down the street we turned into the road that would lead us to my daughter's friend's house. I was driving carefully because the area was a bit dark (broken streetlights). All of a sudden I saw someone jump out and rush towards the passenger side of the car.

'What the ....?!?' I exclaimed. I wasn't sure what had happened. I was pretty certain I hadn't hit someone but I knew something had hit my car. I slowed down and came to a stop when suddenly a man appeared in the road next to the car and started shouting 'Don't stop! Keep going! Keep going! He's coming! Don't stop!' I looked out my rearview mirror and sure enough some maniac was running down the road towards my car waving what appeared to be a metal bar. I took off.

With our adrenaline pumping, We made it to my daughter's friend's house and I got out to see what had happened to my car. There were no streetlights working on her street either and it was dark but I could see a deep dent in the top of the car above the window. I realized that had the guy hit the window it would have smashed my daughter's friend right in the face and head. It was a rather frightening thought.

Being a civic-minded person I decided that we should immediately report this to the police. What was I thinking? I drove to where I knew there was a police station but when we got there it was no longer there. Maybe they moved it? Do they just move a police station? I told my daughter to get out and ask at a nearby supermarket. With a big sigh she said 'Mom. Do you think you're in America or something? Even if there was a police station they would just look at you as though you were crazy and were wasting their time.' I suppose she was right. I gave up and headed home.

When we got home I looked again at the damage to my car, counting my blessings that this was all that had happened. Raving lunatic, irate drunk or crazed drug addict... who knows? We were home safe. 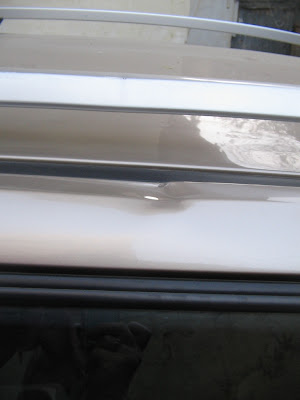 Here I had been thinking that my life had become ho-hum and some adventure happens my way. I should be careful what I wish for in the future. This was definitely not what I had in mind. 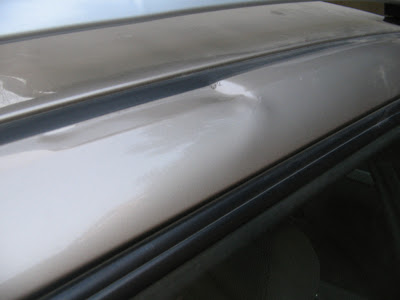