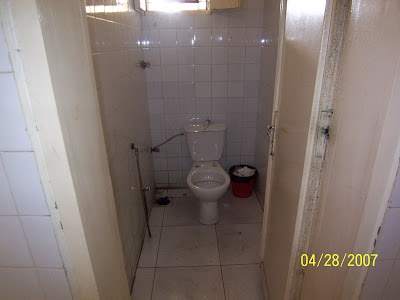 I haven't had a picture for the 'Where is this?' challenge in quite a while. So here's a recently taken picture for the challenge. If you think you know where it is (or you want to guess) click on comments. Click on the picture to see an enlarged image.

Tara wins this round of Where is this? Not fair really since she's the one that gave me the picture in the first place. And yes Kris, it is very much improved since we were there last.

This is pretty much a typical public bathroom in Libya. When my kids saw the picture they said it looked like a bathroom at either a public school or a mosque. In fact this particular picture was taken recently at Ras Ajdir, the border post between Libya and Tunisia - on the Libyan side. Tara was horrified, but I looked at the picture and said 'Hey, that's not too bad. You should see some of the bathrooms I've been in!'

I think everyone that's ever been to Libya has a bathroom story... some of us have more than one. I've got plenty of weird bathroom stories. But I think I'll just tell you my best one. It's the one that's the most bizarre. The sentimental journey begins like this...

Long ago, way back in 1990, when I was pregnant with my daughter Nora, I was having complications and the doctors decided that it would be best if I gave birth at the public maternity hospital which is connected to the children's hospital, Aljala. This measure was for 'just in case of any emergencies' and thank God none happened. I wasn't thrilled with the idea of having to deliver at Aljala and so I decided I would wait until the last possible minute to go - and I managed to do this, arriving at the hospital at 5:30 in the morning and delivering just 25 minutes later.

Shortly after delivery Nora and I were moved to the ward. It was a room that had 18 beds in it, all of them filled, except one. The nurse pushed me in the wheelchair to my assigned bed and found the mattress, a flimsy foam type, was soaked in fresh blood. I suggested to the nurse that she flip the mattress over to have a look on the other side. Of course the blood was soaked all the way through.

What to do? Here I was, stuck in the hospital, I was at their mercy. The nurse was a sweet woman from India and she felt sorry for me. It certainly felt good to be able to speak English to someone. We discussed what to do and she decided to see if she could find a plastic bag - the big industrial kind that is used for waste. She came back with the bag and we opened it up and laid it across the edge of the bed. Then she helped me out of the wheel chair and I stayed there, leaning up against the edge of the bed, holding on to the metal railing, doing my best to stay on the plastic. It was a balancing act that was made more difficult due to the fact that I had just given birth. Nora was tightly wrapped in a blanket and tucked into a bassinet.

A short while later the same nurse came back with something for me to eat. She said 'Don't worry. This food is clean. I went into the kitchen and prepared it personally for you.' God bless that nurse for her kindness! So I ate an egg sandwich with cheese and had a piece of fruit and a glass of milk, all the while doing my best to ignore the Libyan women in the ward who were not too happy to see me getting special treatment.

I really am lucky that my delivery was an uncomplicated one and that I was able to recover my strength quite quickly. The shock factor of seeing the filth around me made me want to get out of there as fast as possible. I asked when I could leave. 'Probably not until tomorrow.' was the answer and visiting hours weren't until four in the afternoon. It was going to be a long wait.

Nora began sucking her thumb about 2 minutes after she was born and she was contentedly sleeping the whole time, thumb in her mouth, oblivious to all that was around her. After about 45 minutes I decided to attempt to find a bathroom. I walked slowly, holding onto the rails of each bed, making my way down the ward. Then when I got to the corridor I kept near to the wall so I could reach out for support and lean against it whenever I felt dizzy. I slowly passed the entrance to each ward, stopping for a rest and looked in the doors. I can't remember how many wards there were, but they all looked the same as the one I was in. Finally, after what seemed like a long time, I made it to the bathroom. Only one bathroom on the floor, shared by all those women, in all those wards! And what a bathroom!

Well, never in my life have I seen such a place. Shock, total shock! There was a row of sinks, none of which worked, and along one wall were three stalls for toilets. Two of the stalls had western style toilets in them. They weren't working, but out of necessity women had used them anyway. Blood, urine and feces were everywhere. But even more awful was a huge mountain of sanitary napkins thrown on the floor with the biggest cat I have ever seen in my life eating from the pile. The cat looked over it's shoulder at me and hissed. Hissssssssssssssssssss! And then he turned back to his meal.

Too weak to make a run for it and in desperate need, I resigned myself to the task of actually using the only working toilet. It was an old fashioned, hole in the floor type. Imagine how it feels to be crouching over a filthy hole in the floor when you've only recently given birth? In the corner of the bathroom was a shower stall with a faucet that had a trickle of water coming out of it. I did my best to clean myself up at the water tap and got out of there as quickly as I could.

In a daze I managed to get back to my bed and resumed my perch on the plastic bag. It took forever for four o'clock to arrive. As soon as my husband saw me he said 'Get your coat on. I'm taking you home.' There weren't any doctors around and the nurse said she would sign me out but that I would be leaving at my own discretion; they wouldn't be responsible for anything that might happen to me. That was fine with me. I couldn't get out of there fast enough!

I survived the experience. I've heard that they've cleaned up the hospital since then but I visited someone there a few years ago and found it much the same. Libyan women give birth there all the time and their attitude is: 'It's only for a day and then you can go home.' To me that is so sad that they have such an attitude. Even animals deserve better treatment! I had four more children after Nora - thank God after that time private hospitals and clinics started opening up and so I could go someplace that was relatively clean. But not everyone has that option available to them. Not everyone can afford to pay for a private clinic.

Last week I saw this article in the news: Poor Plumbing To Blame For Six Premature Baby Deaths In Montreal. It made me wonder what the hospitals in Canada looked like. And it made me wonder how many deaths in Libya are caused simply because of filth. I'm thankful that neither Nora nor myself suffered any ill effects from the filth we were subjected to (except for lingering nightmares and thoughts that make my skin crawl).

So that's one of my Libyan bathroom stories... hard to believe but true!