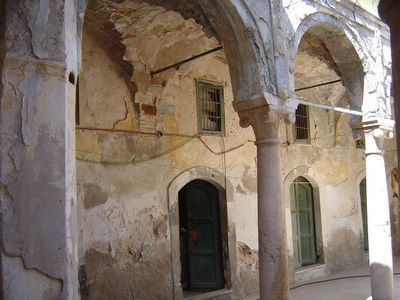 On the left is one of the main supporting columns. There are four main columns - one in each corner of the courtyard. In the center of each of these columns is a pipe that allowed rain water to drain down from the roof; this sweet water was collected in a storage tank beneath the courtyard. In three of the columns there is a hole near the top of the column open to the pipe - it looks as though it was made that way in case they wanted to divert the water for some reason or another.