Friday at the farm 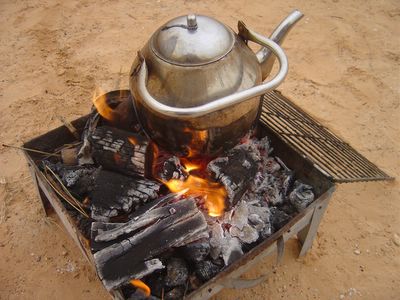 Yesterday the weather was hazy and dusty, but we decided to go to our farm and get some 'fresh' albeit dusty air and have a cup of tea.

In the beginning it was just fine. I took a nice walk around what we have named 'The Rhonda Ellen Jogging Trail' which is a 1/2 kilometer trail my husband designed so we could all walk/jog around for exercise. It's named after my friend Rhonda Ellen - not because she thought up the idea, but because I thought of the idea and had to have someway to convince my husband into going along with it - so I told him Rhonda suggested it and he got gung-ho and put the idea into reality. (If I told him it was my idea he would have probably never got around to it - after 23 years, I have him figured out, you see.). The jogging trail is really looking nice. Mustafa has planted trees and flowering plants and rosebushes all along the way and plans on putting some benches at various intervals so we can take a rest in the future.

After I walked for a kilometer and a half, we started up a pot of tea. Got the tea poured out and all of a sudden the wind picked up. Sand in the tea - in the bread - and in the biscuits. Then it began to rain - so we quickly picked everything up and headed for home.