Plenty to read about if your interested in Libya

Eid Al-Adha is tomorrow. I'm ready - knives are sharpened, all the pots, pans, tubs and dishes are waiting on the shelf, we've stocked up on cleaning supplies, I've got all I need for making jerky, my husband's Eid clothes are ready to wear. We're ready for the day's hard work. The only problem is that I've got a swollen eye - an allergic reaction. I look awful and the antihistamines I'm taking make me drowsy - but I'll make it through the day. Happy Eid for all of my readers who celebrate.

I haven't done a whole lot lately. I guess I'm saving up for future adventures. However, I've been spending lots of time on the internet catching up with old friends, browsing old articles and reading new ones. Now that Libyans are free to write as they like there are all kinds of intriguing subjects to read about. Some articles I've found particularly interesting or thought provoking (in no particular order and not complete):

Scholarships... an article about the abuses of the Libyan scholarship issuance and procedures. I hope there are changes in the future.

The Plight of Libyan Diplomats... an editorial written about Libyan political appointees vs career diplomats and the hopeful changes for a new Libya - an eye-opening article that would never have been published during the Kadafy regime. This article is in the Tripoli  Post, the English newspaper of Libya's past and now it's present and future. It's interesting to see the content now! Such a contrast to what was published in the past. Such a refreshing change.

The Ontario man who helped Muammar Gaddafi's son to flee... an article about Saadi's bodyguard, a man who has no qualms at all about his job. Some people find money so motivating I guess - nowhere in the article does it mention whether the bodyguard is gay... but I wonder... lolol...

Translating for Gheddafi... an account of a Libyan who worked as a translator for journalists - an insider's view to life at the Rixos Hotel during the war and gives a list of those who were paid off by the former regime.

Pro-Gaddafi group targets hundreds for assassination... about a group that says they have a list of 500 names that the Libyan Liberation Front (LLF) wants to kill, one by one. And they say it's only the first list! No names were given so I guess I just have to hope I'm not on the list.

Libyans Express Hope for a Modern Islamic Democracy...  Countless articles have been written about the new Libya embracing Islamic Sharia. The journalists jumped on this news as though it were some kind of treasure trove. Horror of horrors! Libyan men would all be running off to the pharmacy to stock up on Viagra so they could take on four wives! Libyan women would be oppressed, buried under their burkas! One-handed thieves would be easily spotted around town! What they failed to do was investigate the legal system that was already in place - one that was based on... surprise... Sharia.

Sharia laws are not new in Libya - they have been the basis for family law, inheritance, marriage, divorce and most criminal laws. Polygamy has always been practiced in Libya. At one point during the Kadafy era a law was implemented that a man must get the permission of the first (second/third) wife(es) before being allowed to marry another - but this law was soon dropped. So nothing is really changing in Libya. It's a moderate Islamic country where women are educated, work and are not forced to wear the veil. I don't understand what the fuss is about. People hear the word 'sharia' and go into some kind of wild panic thinking women will have no rights. Instead they should look up Islamic laws and find out what they are all about. I think they will be surprised.

Libya has a new interim Prime Minister... Abdurrahim Al-Keib, an electrical engineer who was a professor in an American university for 20 years (and strangely enough I heard he is the brother of Kadafy's banker). He has a lot of work ahead of him but his appointment is to end in eight months when Libyans hold their first elections. Good luck Mr Prime Minister! You've got lawless rebels to deal with, Kadafy's psycho son is still on the loose,  and thousands of Libyan citizens are trying to get back what is rightfully theirs. Not to mention sorting out the education system, healthcare, and rebuilding (or lets just say building) the infrastructure of the entire country. Hold on for the ride of your life! 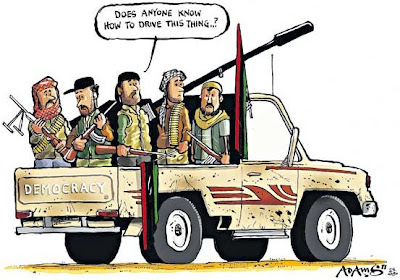