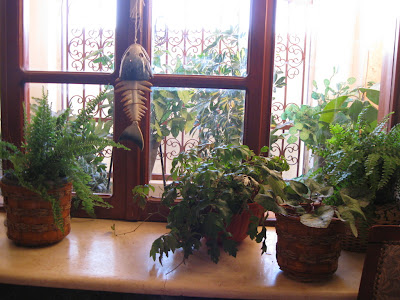 Todays task of sorting out the window next to my desk - accomplished! I think the new plants look nice and I took care of the old plants. It still needs something with flowers - but this will do for now. The whole area next to my desk looks fabulous now.
Here's another picture from behind my desk: 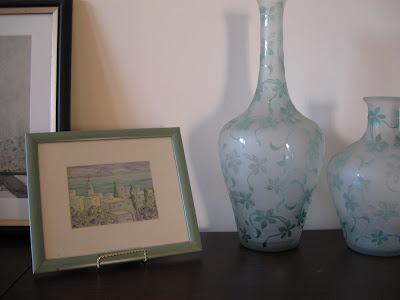 When I first came to Libya in 1989, I came through Tunisia. So Tunis was where I stepped down on the continent of Africa for the very first time. As I walked down the steps of the plane I looked out at the view  of a mountain in the distance which I later learned was called 'Jabal Bou Kornine' or the Two-Horned Mountain. I've been back to Tunis a few times since then and we usually take the time to go for a picnic and hiking on that very same mountain which is also a national park. It's quite nice actually, there is interesting wildlife to see, including wild boar (quite a surprise to come face to face with one when I didn't expect it). There's supposedly some ancient Roman ruins but I've never come across them. Once, while shopping in the capital, I found a really pretty card with the mountain in the background. I fell in love with it and bought it, took it home as a souvenir and had it framed. It's been sitting next to my desk ever since, as a reminder of my arrival in 1989.  One day I will visit again... I'm sure whatever changes there will be, the Two-Horned Mountain will still be there.
An update: Yusef came home with yet another dog today. Now there are eight. .... I think we are turning into a dog rescue shelter.
- January 15, 2011