Today I was thinking about all of my past Ramadans. It seems so long since my first Ramadan back in 1981, thirty-seven years ago. So much has changed in my life since then.

This year, right before the beginning of Ramadan, I took my kids shopping at a local Asian market. We had a great time, happily checking out all the interesting things and deciding what to buy to try during Ramadan. When we finished shopping and walked out to the parking lot, there in the middle of the lot was a crowd of people gathered around the scene of a car accident... and the car at the center of everyone's attention was my car! 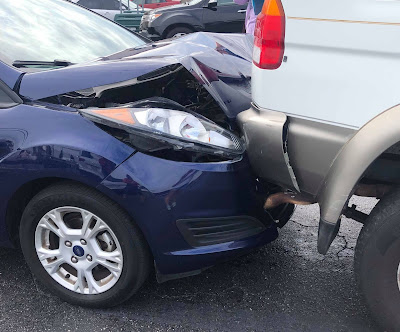 What a shock! It turned out that the man who hit my car had been driving recklessly and decided, for some reason I will never understand, to back into the parking space in front of my car at high speed. He smashed into the front of my car so hard that it pushed it clear out of the space and across to the cars parked on the other side, narrowly missing a parked Jaguar. There were two girls that came over immediately and said they had witnessed the event and would wait for the police to give a report. The police had already been called and were on their way.

The man that hit my car was a newly arrived immigrant from Vietnam. He'd only recently gotten his drivers licence and this was already his second accident (he was driving his friend's car both times - poor friend!). The police arrived and charged him with reckless driving and revoked his licence on the spot.

My daughter Nora took lots of pictures for the insurance company while I stood by in shock and disbelief. My car had only 24,000 miles on it and not even a single scratch.... now what? Everyone was so kind to me; the policeman, the insurance agent, the witnesses, the tow truck driver. I was thankful that no one had been in the car, no one had gotten hurt, it could have been much, much worse. I was too shocked to cry. My heart ached and I wondered if I should ask to be taken to the hospital. We went home and I went straight to bed and stayed there. In the evening we went to the beach and sat quietly watching the sun set.

Initially, the insurance company said the car was repairable. The body shop told me that there was over $6,000 worth of damage. After they started taking it apart a few days later, they said the damage was much more extensive and decided to total it. The insurance company and I discussed how much they'd give me for the car - quite a bit less than I wanted. I argued with them that it was in pristine condition and still under manufacturer's warranty. In the end we came to a compromise. I started car shopping and picked up the check. It didn't take long to find a car that my mechanic approved of and fit my budget. I am back on the road once more.

Later, when I went to the auto body shop to take the licence plate off my car and remove the things I had left inside. I stood and looked at the car and cried. I said to the woman from the body shop 'Maybe I should take one last picture' but she said 'Oh no don't do that. It's bad karma.... just leave it behind you and walk away. You are meant for something else". I took her advice, dried my tears and walked away.

All of this excitement happened at the beginning of Ramadan and added to that I had a three-day trip to San Francisco for some work right in the middle of these chaotic days. While in California I met up with my cousin and an old friend from Libya. It was a whirlwind trip, but I managed to also see Fisherman's Wharf, Alcatraz (from afar) and the Golden Gate Bridge, which was on my bucket list. So much to be thankful for.

After the accident one of my colleagues sent me a message: "I'm sorry God is using this time to strengthen your patience. Practicing patience sucks." I pondered on the events and reflected on my beliefs. I know that no matter what sort of adversity a person experiences, God will create a path or a way out for those who are steadfast in their patience.  God revealed in the Quran: For truly with hardship comes ease; truly with hardship comes ease. (Surat al-Inshirah: 5-6) and ... Whoever has fear of God - He will give him a way out and provide for him from where he does not expect. Whoever puts his trust in God - He will be enough for him... (Surat at-Talaq: 2-3).

There are three more weeks left of Ramadan. I will continue to practice patience! 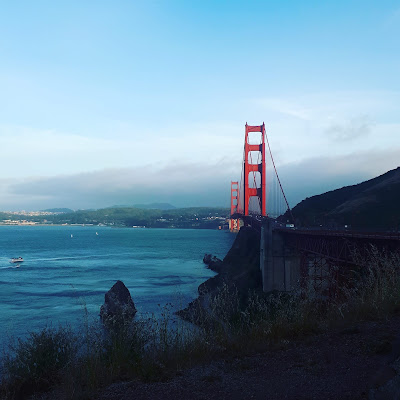