About 55 years ago, before my parents got married, my father visited Florida and bought some land. The plan was that once he was married he would move his family to Florida and build a house there one day.

Time passed, there was marriage and then one child, two, three, four and finally five. My father's work brought him to Florida from time to time. He decided to look into relocating his business. He looked in the vicinity of the land that he had bought, but found it wasn't suitable. The area wasn't built up enough. In the end, my parents found a house in the Tampa Bay area. They decided to keep the land as an investment, possibly to sell in the future.

From time to time my parents were contacted about the land to say that the city and county were making improvements; streets were paved, sewers, telephone and cable lines installed. My parents paid yearly taxes while they continued to hold on to the land as an investment. A few times they drove out to have a look and indeed found the city was improving, but it wasn't growing very much. They decided to continue to hold on to the land.

This summer my mother and I discussed visiting the land. Actually, it isn't very far away, about an hour and forty-five minutes, but that's quite a journey for my mother, especially to go there and back on the same day. I suggested we go for a few days and turn it into a mini vacation.

Packing up the car required a long list of 'to dos' and 'don't forgets' - there was medicine, a wheelchair, a walker, an oxygen concentrator, a nebulizer, a supply of portable oxygen tanks, and so on. We enjoyed the ride and settled into the hotel when we arrived, sorted out ourselves and had a short rest. Then we headed out to have a look at the land.

Port Charlotte is a small city that is well planned with a shopping mall, most of the major fastfood chains and restaurants can be found there and schools have good ratings. It was named to Forbes' list of "25 Best Places to Retire in 2015", listed among the ten best places in the United States to retire for the year 2012 by U.S. News & World Report, and was ranked at #1 in CNNMoney.com's 2009 list of 25 Best Places to Retire. (https://en.wikipedia.org/wiki/Port_Charlotte,_Florida)

What was most noticeable to us was that the place looked like it was built and ready for a big housing boom, but the boom never seemed to happen. There are signs everywhere: Land for Sale, 12 Acres for Sale, Lots for Sale... even signs that said 620+ Acres for Sale. The roads are all paved, phone lines strung, sewage systems in place.... and cheap land everywhere!

The neighbourhood where my mother's land is located is mostly lot after empty lot, but there are some houses scattered around, mostly on plots of land along the rivers and waterways. A lot of houses had For Sale signs on them. A quick online search led me to a 9 bedroom, 9 bathroom house on my mother's street that is listed as being valued at about 3 million dollars, but sold recently for a mere $80,000. We wondered who built the house, and why?
We got out of the car and walked around, snapped a few pictures, sighed a few sighs.... The land isn't worth that much. Actually, the land value hasn't increased much since my father purchased it about 55 years ago. My parents probably paid more in taxes on it over the years than it is worth. We headed back to the hotel and the kids had a swim. Later we went out for dinner and then watched TV.


My mother's health issues require that she is on oxygen most of the time. Her oxygen concentrator makes a continuous 'whoosh, whoosh, whoosh, whoosh' sound when it is turned on. That combined with the television that my mother insists should be on all night long made me worry that someone would complain, but thankfully no one did. In the morning my mother asked if it was alright to go to the restaurant to eat breakfast in her pajamas. I said "No! You need to get dressed!" Mom is not really a morning person, but we had planned to spend the day at the Myakka River State Park so I had to get everyone up and moving and pack up the car for the day out.

The ride to the park was beautiful. Along the way were small farms, cattle ranches and an abundance of 'Land for Sale' signs. We had a lovely day at the park. The weather was perfect and there were plenty of things to do that were accessible to my mother. Part of the time she rested in the car. 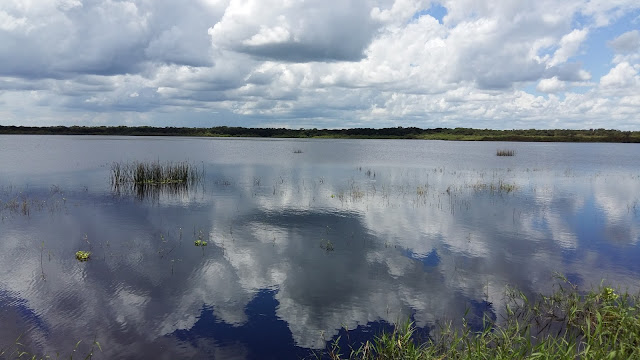 We enjoyed the park, the scenery, the small visitors center and museum, hiking around and the boat ride. After a very pleasant day we headed back to the hotel. The kids went for a swim to cool off before dinner.


The next morning I woke up to find my mother missing. She wasn't in the room. I quickly got dressed and went out to find her. Where was she? She was in the dining room of course, happily eating her breakfast - in her pajamas!

After breakfast we packed up the car and headed for home. No decisions were made about my mother's land, but we had had a lovely mini vacation.