Libya still finding it's feet, but hey, it's finally autumn!

It's finally autumn here. The weather is cooling off and we've had a few showers. Below is a picture I took   one day last week of an approaching storm at sunset. There was an incredible show of lightning right behind the mosque but I was never able to click fast enough to catch the lightning strikes. 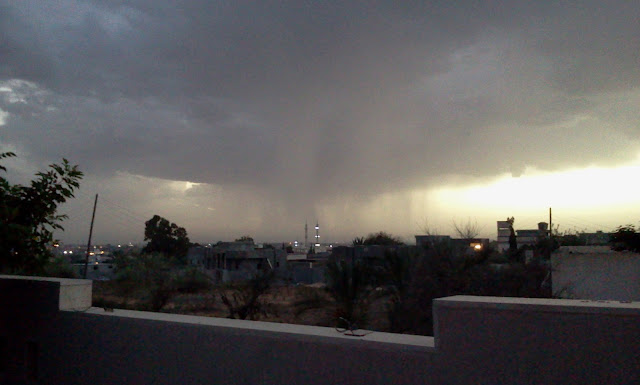 We've finally finished painting the house, well just the stucco (or graffit as they call it here) so far. We still have to paint the ironwork. These days we're installing all the lighting and as my husband has decided to take on this project himself there is a lot of him going up and down ladders and turning on and off the electricity. But it looks good so far - I'm really pleased how it's all coming together.

Next Friday is Eid al Adha - the Feast of the Sacrifice or in Libya it's often referred to as Eid al Kabir, the Greater Eid. More information can be found about the holiday on: Wikipedia. We've already got our sacrificial ram. He was imported from Spain so we've aptly named him Juan. Usually we wait until right before Eid Day to buy our ram and this might be a better idea because Juan is becoming kind of a pet and I think it's going to be hard to slaughter and eat him. Poor Juan.

Libya has been a bit unsettled... There was a prison break last week so check points were in place around town. We're locking our doors and I'm not going out unless it's necessary.  Some areas around Tripoli had electricity cuts and now there are water cuts too that are expected to last for five days. Thankfully we have a well, so as long as we have electricity we have water. But most unsettling is the assault on Bani Walid. Clashes in the former Gadaffi stronghold have resulted in a number of deaths and injured so far. I wish they had sorted out the situation with Bani Walid a year ago, but the NTC were adamant that they were surrounded and would just give in... how stupid was that.... sigh...  There has been an increase in the number of helicopters and small planes flying over our house in the direction of Bani Walid. I hate the sound of the planes, they make me feel nervous. I pray that they find a peaceful solution.

Tomorrow marks the first anniversary of the death of Moamar Gadaffi. I will never forget that day for as long as I live.