Learning a Lesson in Cultural Differences

In America when you go on vacation you might stop to pick up a few souvenirs and some postcards to send your friends and family. No one expects you to bring them back anything. If you do it's appreciated, but it's definitely not expected. It's different in Libya. Traditionally, when you have been traveling you should bring back gifts for your family and friends. You don't have to go overboard, something simple will suffice. Everyone expects something. Unfortunately, with the amount of relatives, even getting something small and inexpensive adds up - you have to consider the amount of money (the dollar very high now) and space in the suitcase (23 kilo limit). Over the years I've mostly dispensed with the gift giving with the exception of getting something for my mother in law - she always gets presents.

This time, before I came back I asked her if there was anything she needed or wanted. She requested body lotion and hand cream. She said only cheap imitation toiletries were available in Libya and she didn't like or trust them. That was easy enough! I chose some brand named lavender scented creme and chamomile lotion - with the added bonus that they were on sale and I had a coupon. I added a few pairs of shoes and some other things I thought she might like and Ibrahim found a big cloth carry bag for groceries that he said would be perfect for carrying home bread from the bakery. Handmade soaps are all the rage these days in America. I picked some lavender out and added that to the bag - it smelled so good.

Every travelers' nightmare... lost luggage. We arrived in Libya with just our carry on bags. All of our checked bags had decided to take a trip elsewhere. I filled in the necessary claim forms and hoped for the best. I apologized to my mother in law and told her she'd have to wait for her presents. She said it only mattered that we got here safely.

Through a friend we managed to find a contact of someone that worked at the airport in Tunis. He'd look out for our bags and if he found them he would arrange to put them on a flight to Libya - for a price. That was fine, we just wanted the bags. Two of our bags appeared a few days later, but the bag with the gifts was still nowhere to be found. We suspected that it might have been stolen, but hoped for the best. I contacted the airline's website and heard nothing. Then decided to try Twitter and got an immediate response. I guess it doesn't look good to have anything negative on their Twitter feed. They followed up on the missing bag and finally, after 18 days the bag arrived. I'm happy to say nothing was missing.

I was finally able to bring my mother in law her gifts. She was happy with the creams and lotions, the shoes I got her fit perfectly and the cloth bread bag would be put to good use. The last thing she looked at was the handmade soap. She examined the package and asked me what it was. 'It's handmade soap. People make it at home to sell in farmer's markets.' I told her. Her eyes widened in surprise. 'Why would they make soap? Are people that poor in America that they are making soap? Can't they afford to buy Camay, Dove or Oil of Olay?' she asked. She was so surprised.

I tried to explain that people find handcrafted goods a kind of luxury. They like that it's something that someone made with care and attention, usually from simple, organic ingredients, unlike commercially made things that are full of chemicals. My mother in law didn't look convinced. She turned the package over and over in her hand. I told her 'You don't have to use it if you don't want to. Smell it - it has a pleasant smell. You could put it in your wardrobe or in a drawer to keep things smelling nice.' She agreed that it smelled good, but I could tell she wasn't really convinced. To my mother in law, the handcrafted soap appeared cheap, not something you would give as a gift. Name brands are more important in Libya. Lesson learned - next time she'll be getting the name brand stuff - it costs a lot less! 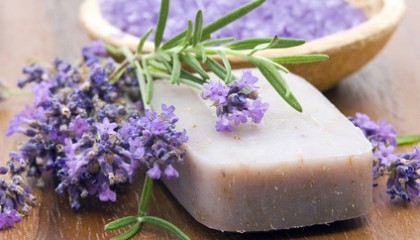