Another year has passed

It's that time of the year again, time to sit down and look back at the year. It's an opportunity to look back, count blessings, think about changes and consider what the new year will bring. Here's an overview of 2010.
January
The weather was changeable, sometimes rainy, sometimes cold but I had a chance to start planting seeds for the garden. The kids had exams and Yusef had his birthday for the first time in our new house. I went on a shopping trip with my mother-in-law. One special evening, Jenna and I watched in awe as a fireball arched across the sky in front of us - a part of the Coma Berenicid meteor showers.
February
There weren't many posts in February. I lost a very special friend and mentor to brain cancer. I spent a lot of time contemplating life and just going through the motions. It was like walking through a haze. On top of that I had a car that was misbehaving and a very slow internet connection and was plagued by bad dreams... sigh.
March
Busy weeks and pleasant weekends, one that included a trip to Tarhouna.
April
I went through an 'I hate Libya' phase during the beginning of April. This was sparked by nearly getting my pocket picked, the dog being poisoned, a pervert hanging about near the elementary school and escalating food prices. Some time spent in the garden helped get me through all that. Later I wrote about how Libyan traditions were changing, specifically relating to clothing. I found A&W root beer - which unfortunately I can no longer find...sigh.. but it was good medicine for my soul for a bit.
May
Exams, changeable weather and intermittent electricity. I commented about the problem with Libyan women (Libyan men are the problem!).
June
Long summer days. The kids were bored and we spent time in the garden and on the farm looking at flora and fauna.
July
This month marked the end of the World Cup and getting ready for Ramadan. My mom spent time in the hospital which left me glued to the internet to keep up with my family on the other side of the world.
August
Ramadan. The kids took over the cooking this year while I supervised. I reported on the cooks of the Libyan blogoshere. We got a new dog. Long days of fasting in scorching temperatures, and fun nights with friends and family.
September
Ramadan ended and we celebrated a quiet Eid Al-fitr. The new school year began and we got back into the swing of things. More time was spent in my ever changing garden. The month ended with a guest post about driving in Libya by expatarrivals.com.
October
Rita, a stray dog, decided to make our house hers. We spent time in the garden where Jenna found a lovely toad - was it Prince Charming in disguise? Most of the month was spent driving kids back and forth and too much time was spent at work (and not enough time was spent having adventures).
November
I had surgery in this month and counted blessings when all turned out well. We celebrated a quiet Eid Al-adha. Lots of excitement, plenty of rumours, and bumper to bumper traffic during the African Union Summit that was hosted in Tripoli.
December
The last month of the year is fairly quiet. I finally got some new wheels - just in time, as the old car had decided it was time to give up. The weather finally started to look like winter as the clouds dumped rain and the streets flooded. It was a good chance to see how my new car handled in wet conditions and concealed potholes. I had a much needed break in the mornings giving me a chance to get caught up.
Overall, I think I hated 2010! Spending time in my garden helped me ease some stress and get me through some rough spots. Looking back I noticed that I didn't have very many adventures, I spent way too much time working, and not enough time enjoying family, friends and home. Nothing was very good about the year -  I'm glad 2010 is over! I'm looking forward to 2011.
Best wishes to all for a very Happy New Year!
- December 31, 2010 3 comments:

Just when I was going to start griping about my shlafty neighbours a solution arrived, literally on my doorstep.
You see, for the past couple of months I've been really ticked off with the people who live at the farm next to mine. The problem is their trash. They've dug a big hole next to the dirt road that leads to my front gate and have been dumping their garbage in the hole. Such a lovely sight to see as I drive up to my house! Not to mention the odor, flies, stray dogs and rodents that it attracts. Periodically they light their dump on fire, usually right after I've hung out the laundry to dry. Why can't they put their rubbish in plastic bags and drop it off in one of the many dumpsters that are placed around town? Yes, it's a bit of a hassle but it keeps the neighbourhood free of trash, smells and vermin. If we can do it they should be able to do it too.
I've been on a nagging campaign, begging my husband to go over and have a word with them. But he has steadfastly refused on the grounds that he doesn't want to make any trouble. He's complained to them in the past about other things and it's never gone over very well with them. They're simple country people... not very accepting of new fangled ideas like plastic trash bags or hygiene.
This morning while I was contemplating what to make for lunch, our dogs started barking and growling. I wasn't expecting anyone so I went out to see what was going on. I could hear men's voices on the other side of the wall. Then I heard a car drive up, and the dogs immediately quieted. I could hear my husband talking to the men so I went back inside. Maybe my husband had brought some workers to do something.
It turned out that the company, Rentokil, was making their rounds in our area and stopped when they had come across the sight of the garbage. My husband came home and found them setting up a rat trap next to our wall and across from the rubbish. They said they had noted the place on their GPS and would be sending someone to officially tell the neighbours to remove their garbage. So the problem will be solved! Yeah!
... now if we could only get rid of the neighbours....
- December 27, 2010 No comments:

Don't leave home without it!

Nothing to do but relax today - it's been raining off and on all morning. The last few days Sara and I have been hunting for furniture. Most of the stuff in the shops is poor quality - worse than last year when we were looking. Some of the shops have the very same furniture as last year. We think we've found something, but we'll have to go back and look at it again before we make the final decision.
I finished the book 'A Reliable Wife' by Robert Goolrick - Washington Post review: Here - I read online that it's going to be made into a movie. I hope they do it justice - it's gonna be HOT - and I wonder who will play the role of Antonio? Now I'm on to a much tamer story: 'Plain Truth' by Jodi Picoult. If anyone plans on living in Libya for any length of time and they like to read, don't come here without an e-reader!
- December 27, 2010 3 comments:

At last I'm having a bit of a break. No work in the mornings until next year, although the evenings will continue on as usual and I still have to wake up at 6:00 am to take the kids to school. But it gives me a few hours everyday to get things done that I've been putting off.

So here I sit filling up my calendar with things to do for the next two weeks:


I added support for mobiles for my blog - so if you read this on your mobile please let me know if it's working correctly.
- December 22, 2010 1 comment:

A change in the weather 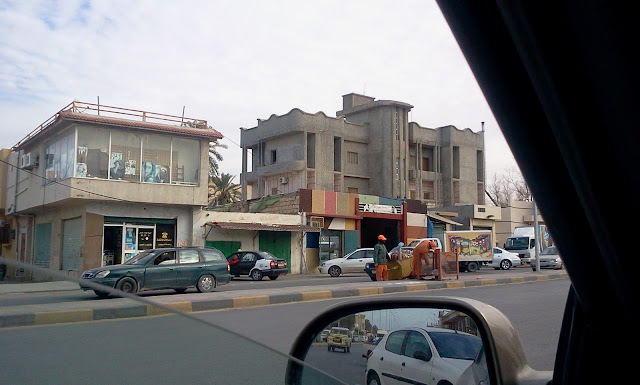 The weather is finally getting cooler. Whenever this time of the year comes around I get the overwhelming feeling that I just want to sleep. It's as though my body has to slow down and adjust to the change. So today I took the afternoon and evening off and climbed into bed and slept for a few hours. It's only the beginning of the week and I'm looking forward to the weekend... so I can sleep. After I get used to the change in the weather I'll be ready to have some adventures. ... still waiting for licence plates for the new car... maybe tomorrow...
Too tired to bother cooking lunch, I took the picture above while I waited for Yusef to get some shawarma for us. A typical street scene  - Notice the shop in the middle that's selling exterior house paint, and the house behind it that is unpainted, African street cleaners who are taking care of the garbage and sweeping up the sand that piles up on the edges of the roads, cars across the street and in the mirror.
The sky was overcast today... and I felt overcast too. It was so nice to have a lazy afternoon and evening at home.
- December 13, 2010 1 comment:

I came home from work yesterday to find a new car in the driveway... well, not brand new, but new for me. Yeah! We need to get insurance and the registration sorted out and then it will be ready to take me on new adventures.
In the evening I went out with a friend in the old car. We were driving along, chatting away, just as happy as could be, and all of a sudden steam started shooting out of the front of the car and the temperature gauge shot up to the hottest temperature. I managed to pull the car over to the side of the road. I think it must have known that it's replacement had arrived. My friend and I decided to just abandon it. My husband went over later and picked it up.
That old car has taken me on lots of adventures and I think that I've spent a good part of my life in it taxiing everyone around..... kind of sad in a way to be putting the poor old thing to rest.... sniff, sniff...
- December 10, 2010 4 comments: