The  constant power cuts combined with the hot weather have made life simply miserable. In twenty-four hours our electricity was on for only two. When the power is off during the day you barely have enough energy to do anything more than lay there lethargically waiting for the power to turn back on. Then when it does turn on there is a mad dash to try to get as much done as possible. A friend of mine lamented that she had slept all day long as she hadn't enough energy to do anything in the oppressive heat, but by nightfall the power  was still off so she spent the entire night wide awake in the darkness, unable to accomplish anything.

There are still lines for gasoline and cooking gas. According to the news they hope the shortages will be solved soon by the arrival of a tanker in the harbor. We've been through these shortages in the past, unfortunately the same senario keeps repeating. You would think that they would have it figured out by now. Many people complain and say it's a deliberate attempt at control. Cut off power and gas and the country comes to a standstill.  Mobile phone service and internet need electricity to operate too. There have been water shortages as well for those who haven't got a well. Imagine not having water for cooking, cleaning or bathing... in this heat... ugh...

There's a mass exodus of foreign workers leaving from the borders, ports and  from the airports that have flights out. Not only foreigners, Libyans are leaving too. Thousands are leaving every day... thousands.... I read on the internet that they are asking for volunteers to help out in the hospitals. Not just doctors or nurses, anyone who can lend a helping hand with cleaning, or other tasks that are now not being done because workers have left. Many of the Filipino and Indian nurses have decided to stay on and continue their work here - how difficult must their lives be in their home countries to make such a sacrifice?

Supposedly there was to be a ceasefire today... I guess the fighters hadn't been informed. We can hear fighting  periodically in the distance. Now that Ramadan and Eid are over there seems to be a lot of weddings (life goes marching on) and with that come endless firework displays. You would think Libyans would be fed  up by now of all the booms and bangs, but they seem obsessed with anything that explodes.

Today I ventured out to do some shopping. The dairy cases were empty, there was no bread in our bakery, the vegetables were overpriced and wilting in the heat,  garbage was piled on the sides of the roads in big stinky, steaming heaps. Most of the shops were closed and the ones that were open were dimly lit - even shops that had a generator as they had no fuel to power them. No one smiled, everyone looked listless and moved slowly. The streets were mostly empty apart from the lines of cars waiting for petrol. Many cars had been abandoned on the side of the road... tanks empty.

It's all rather dismal and depressing....  Twenty-five years of my life has been spent here... half of my life.... sigh....  optimism is fading fast...

The only positive thing to happen lately has been the arrival of Bugsy's kittens. 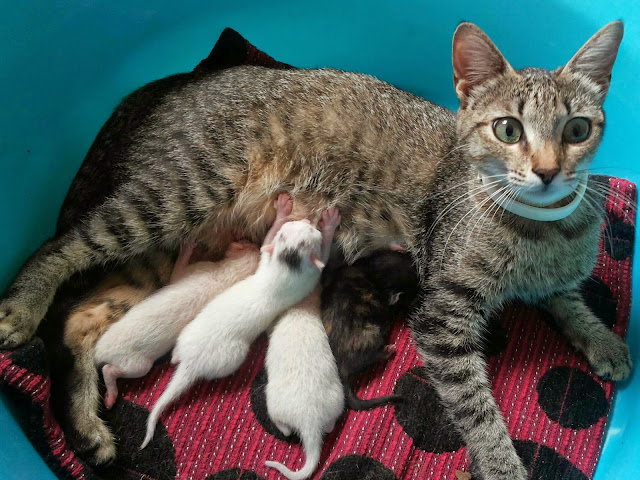